Interview: Assad says civil war in Lebanon could start just like this

by yalibnan
1087
Syrian president Bashar al Assad said: " The civil war in Lebanon could start in days; it does not take weeks or months; it could start just like this"
Share: 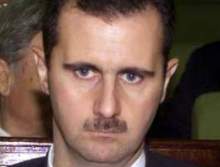 I spoke to Bashar Assad, the president of Syria, this winter in Damascus. Assad assumed the presidency after his father’s death, in 2000, when he was thirty-four years old, and he expressed some empathy for President Barack Obama, who, like Assad, was confronted with a steep learning curve.

One note: a transcript of our talk, provided by Assad’s office, was generally accurate but it did not include an exchange we had about intelligence. A senior Syrian official had told me that, last year, Syria, which is on the State Department’s list of state sponsors of terrorism, had renewed its sharing of intelligence on terrorism with the C.I.A. and with Britain’s MI6, after a request from Obama that was relayed by George Mitchell, the President’s envoy for the Middle East. (The White House declined to comment.) Assad said that he had agreed to do so, and then added that he also has warned Mitchell “that if nothing happens from the other side”—in terms of political progress—“we will stop it.”

Bush gave Obama this big ball of fire, and it is burning, domestically and internationally. Obama, he does not know how to catch it.

The approach has changed; no more dictations but more listening and more recognition of America’s problems around the world, especially in Afghanistan and Iraq. But at the same time there are no concrete results…. What we have is only the first step…. Maybe I am optimistic about Obama, but that does not mean that I am optimistic about other institutions that play negative or paralyzing role[s] to Obama.

If you talk about four years, you have one year to learn and the last year to work for the next elections. So, you only have two years. The problem, with these complicated problems around the world, where the United States should play a role to find a solution, is that two years is a very short time…. Is it enough for somebody like Obama?

Some say that even Hilary Clinton does not support Obama. Some say she still has ambition to be President some day—that is what they say.

The press conference of Hillary with [Israeli Prime Minister Benjamin] Netanyahu [in which she appeared to walk away from the Administration’s call for a freeze on settlements] was very bad, even for the image of the United States.

Israel and the United States:

To be biased and side with the Israelis, this is traditional for the United States; we do not expect them to be in the middle soon. So we can deal with this issue, and we can find a way if you want to talk about the peace process. But the vision does not seem to be clear on the U.S. side as to what they really want to happen in the Middle East.

I have half a million Palestinians and they have been living here for three generations now. So, if you do not find a solution for them, then what peace you are talking about?

What, I said, is the difference between peace and a peace treaty? Peace treaty is what you sign, but peace is when you have normal relations. So, you start with a peace treaty in order to achieve peace…. If they say you can have the entire Golan back, we will have a peace treaty. But they cannot expect me to give them the peace they expect…. You start with the land; you do not start with peace.

You need a special dictionary for their terms…. They do not have any of the old generation who used to know what politics means, like Rabin and the others. That is why I said they are like children fighting each other, messing with the country; they do not know what to do.

[The Israelis] wanted to destroy Hamas in the war [in December, 2008] and make Abu Mazen strong in the West Bank. Actually it is a police state, and they weakened Abu Mazen and made Hamas stronger. Now they wanted to destroy Hamas. But what is the substitute for Hamas? It is Al Qaeda, and they do not have a leader to talk to, to talk about anything. They are not ready to make dialogue. They [Al Qaeda] only want to die in the field.

Europe and the Iranian nuclear negotiation:

Imposing sanctions [on Iran] is a problem because they will not stop the program and they will accelerate it if you are suspicious. They can make problems to the Americans more than the other way around.

If I am Ahmadinejad, I will not give all the uranium because I do not have a guarantee [in response to American and European insistence that most of Iran’s low-enriched uranium be sent abroad for further enrichment to make it usable for a research reactor, but not for a bomb]…. So, the only solution is that they can send you part and you send it back enriched, and then they send another part…. The only advice I can give to Obama: accept this Iranian proposal because this is very good and very realistic. [Note: the Iranian position appeared to be shifting this week.]

The civil war in Lebanon could start in days; it does not take weeks or months; it could start just like this. One cannot feel assured about anything in Lebanon unless they change the whole system.

Cooperating with the United States in Iraq:

They [American officials] only talk about the borders; this is a very narrow-minded way. But we said yes. We said yes—and, you know, during Bush we used to say no, but when Mitchell came [as Obama’s envoy] I said O.K.… I told Mitchell by saying this is the first step and when find something positive from the American side we move to the next level…. We sent our delegation to the borders and [the Iraqis] did not come. Of course, the reason is that [Nouri] al-Maliki [the Prime Minister of Iraq] is against it. So far there is nothing, there is no cooperation about anything and even no real dialogue.

I told him, you were successful in Ireland, but this is different…. [Mitchell] is very keen to succeed. And he wants to do something good, but I compare with the situation in the United States: the Congress has not changed…. But the whole atmosphere is not positive towards the President in general. And that is why I think his envoys cannot succeed.

Criticisms of some Israeli policies at the J-Street founding conference:

Ahh … that is new!… But we should educate them that if they are worried about Israel, then the only thing that can protect Israel is peace, nothing else. No amount of airplanes or weapons could protect Israel, so they have to forget about that.

They supported [Afghan President Hamid] Karzai and realized he cannot deliver. I do not know why they supported him and why—nobody knows why.