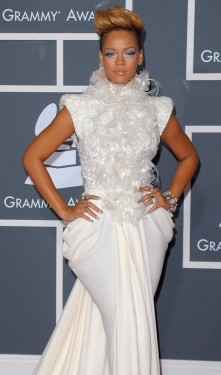 Rihanna looked stunning at the 2010 Grammy Awards at the Staples Center on Sunday (January 31) in Los Angeles.

Rihanna (born Robyn Rihanna Fenty ) is a Barbadian recording artist and model. Born in Saint Michael, Barbados, Rihanna moved to the United States at the age of 16 to pursue a recording career under the guidance of record producer Evan Rogers. She subsequently signed a contract with Def Jam Recordings after auditioning for then-label head Jay-Z.

In 1982, Saab launched his own Beirut-based fashion label when he was 18 years old. His main workshop is in Lebanon, a country to which he remains deeply attached. He also has workshops in Milan and Paris.

The Grammy Awards (originally called the Gramophone Awards)—or Grammys—are presented annually by the National Academy of Recording Arts and Sciences of the United States for outstanding achievements in the music industry.