Lebanon bids farewell to the wife of French ambassador 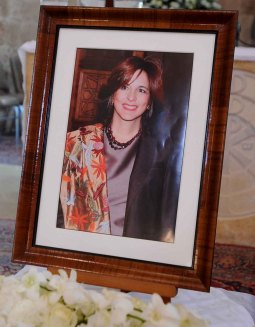 Lebanon bid farewell today to Marla Sanchez Pietton, the wife of the French ambassador to Lebanon who died in the Ethiopian Airlines flight ET409 crash.

The Ethiopian plane , bound for Addis Ababa, crashed into the Mediterranean minutes after takeoff from Beirut at 2:37 am (0037 GMT) during a raging thunderstorm last Monday.

All 83 passengers and seven crew are presumed dead. Only 14 bodies, including those of two toddlers, and some body parts have been found so far.

US navy destroyer the USS Ramage reportedly picked up the signals of the flight recorders late Wednesday approximately 10 kilometers (six miles) west of Beirut airport at a depth of 1,300 metres (4,265 feet) below sea level.

The funeral Mass which was held at The Saint Louis Church of the Capucins was attended by the leader of the “Lebanese Forces , Samir Geagea, the Prime Minister of Lebanon Saad al-Hariri, Minister of Defense Elias Murr, as the representative of President Michel Suleiman, Dr. Mahmoud Berri as a representative Parliament Speaker Nabih Berri, former president Amin Gemayel and a large crowd of lawmakers and political officials .