An Ethiopian Airlines plane carrying 90 people caught fire and crashed into the sea minutes after taking off from Beirut early Monday, setting off a frantic search as passenger seats, baby sandals and other debris washed ashore. At least 34 bodies were recovered.

The cause of the crash was not immediately known. Lebanon has seen stormy weather since Sunday night, with crackling thunder, lightning and rain. The plane went down in darkness and crashed into water that reached just 64 Fahrenheit (18 degrees Celsius) by afternoon.

Lebanese President Michel Suleiman said terrorism was not suspected in the crash of Flight 409, which was headed for the Ethiopian capital, Addis Ababa.

“Sabotage is ruled out as of now,” he said. 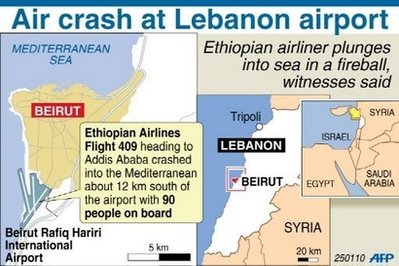