The Turkish Foreign Ministry on Tuesday summoned Israeli Ambassador Gaby Levy for clarification, a day after the foreign ministry in Jerusalem called in Ankara’s envoy to Israel for what the latter described to Israeli Army Radio as the most shameful experience of his 35-year diplomatic career.

Israel’s Foreign Ministry said on Tuesday that Deputy Foreign Minister Danny Ayalon did not intend to humiliate Ambassador Ahmet Oguz Celikkol by seating him in a lower chair without flag representation during their meeting.

Celikkol, according to Turkish sources, did not even know beforehand the reason for the meeting. One official said that the whole episode was an “act of humiliation.”

Tensions escalated Monday, after Turkish Prime Minister Recep Tayyip Erdogan declared during a joint press conference with Lebanese PM Saad Hariri that Israel was endangering world peace by using disproportionate force against the Palestinians, breaching Lebanon’s air space and waters and for not revealing the details of its nuclear program. 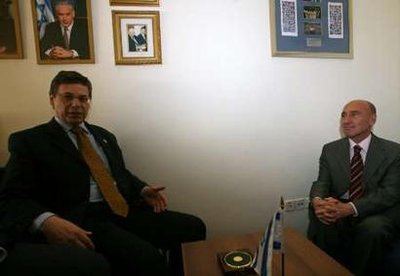