by yalibnan
940
Iran's internal crisis and its nuclear dispute with the West will preoccupy the Middle East in 2010, as will security crises in Yemen, U.S. troop cuts in Iraq, Dubai's debt woes and the Israeli-Palestinian conflict.
Share: 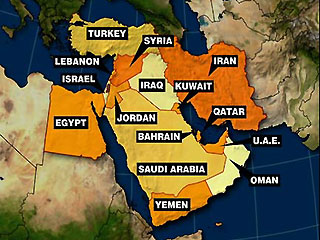 Beirut – Iran’s internal crisis and its nuclear dispute with the West will preoccupy the Middle East in 2010, as will security crises in Yemen, U.S. troop cuts in Iraq, Dubai’s debt woes and the Israeli-Palestinian conflict.

Iran, convulsed by political tumult since a disputed June election, has spurned the West’s end-year deadline for it to accept an enriched uranium fuel deal aimed at assuaging international fears about the purpose of its nuclear programme.

Washington and its allies are now weighing sanctions aimed at Iran’s leadership, instead of broader penalties that they fear could harm popular opposition to the government, officials say.

Such measures could be imposed by the U.N. Security Council, although veto-wielding members Russia and China, may demur.

Iran says it will defy tougher sanctions, but U.S. President Barack Obama, keen to avoid a new war while his military is still fighting in Afghanistan and Iraq, may see them as the best way to head off any Israeli attack on Iranian nuclear sites.

An Israeli strike, while more likely to delay than destroy Iran’s nuclear potential, could entangle the United States in a regional conflagration that would threaten global oil supplies.

The botched bombing of a U.S. airliner on Dec. 25 allegedly perpetrated by a Nigerian trained by al Qaeda in Yemen refocused fears about an impoverished Arabian country that is also racked by civil war in the north and secessionist unrest in the south.

The United States has stepped up training, intelligence and military aid to Yemeni forces, helping them to stage deadly raids on suspected al Qaeda hideouts. Security threats forced the U.S. and British embassies in Sanaa to close on Sunday.

Fierce fighting with so-called Houthi northern rebels since August has worsened fears of Yemen sliding toward state failure and becoming a haven for Islamist militants hostile to the Saudi monarchy and other U.S. allies in the oil-producing Gulf region.

Saudi forces attacked the Houthis after a cross-border rebel raid in November, but the conflict, which has displaced around 170,000 civilians, has raged on. Yemen accuses Iran of backing the revolt. U.S. officials say they have no evidence for this.

— Deeper U.S. and Saudi involvement in Yemen to try to keep the country viable and curb al Qaeda’s ambitious network there.

— Sunni-Shi’ite tensions, even though Zaydis in mostly Sunni Yemen are doctrinally distinct from Shi’ites in Iran.

Groping toward a future without U.S. troops, Iraq heads into a parliamentary election on March 7 likely to herald months of political wrangling over the formation of a new government, amid unresolved disputes over territory, resources and power.

Violence has ebbed in the last 18 months, but may spike in the run-up to the first national poll since 2005. Recent big bombings of government targets, blamed on al Qaeda and others, point up the challenges facing nascent Iraqi security forces.

Arab-Kurdish tensions focused on the disputed city of Kirkuk — and so far held at bay by U.S. forces — could tip Iraq back into war, perhaps sucking in neighbours like Turkey or Iran.

Dubai’s drive to become a premier trade, finance and tourism hub has deflated in a debt crisis and property slump. Can Dubai, known for mega projects such as Burj Dubai, the world’s tallest tower, which opened on Monday, find a steadier business model?

A $10 billion lifeline thrown by Abu Dhabi failed to banish fears about how Dubai would repay debts racked up during years of breakneck expansion, although it rescued developer Nakheel from default on a $4.1 billion Islamic bond due last month.

Dubai World, the holding company to which Nakheel belongs, sought a six-month payment standstill on $26 billion of debt in November, jolting creditors and, briefly, global markets. Creditors have yet to accept the standstill or agree terms.

The emirate’s total debt stock is $120 billion, according to investment bank Goldman Sachs, with at least $55 billion coming due in the next three years. Dubai World alone owes $40 billion.

— Willingness of Abu Dhabi to bail out its neighbour in future and what political or other price it might exact.

Palestinian President Mahmoud Abbas, whose negotiations have failed for years, has refused to return to talks unless Israel halts all settlement construction on occupied land.

The debacle has underlined the widening gulf between the two sides, even though the United States and its European allies are still pushing for an increasingly implausible peace “process”.

Israel may have bought respite from direct attack from Hamas and Hezbollah with devastating assaults on the Gaza Strip nearly a year ago and Lebanon in 2006, but the risk of violence is high given Palestinian frustration and Israeli settler activity.

— Mediation efforts in power struggle between Abbas, who controls the West Bank, and Islamist Hamas rivals who run Gaza.

— Attempts by settlers and their allies in Israel’s ruling coalition to circumvent effectiveness of any settlement curbs.