A Sheep Is Born

by yalibnan
688
By Ghassan Karam How appropriate that the time it took for a Lebanese cabinet to see the light (if it occurs as expected within hours) is matched by the gestation period of a sheep, 150 days.
Share: 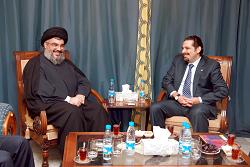 How appropriate that the time it took for a Lebanese cabinet to see the light (if it occurs as expected within hours) is matched by the gestation period of a sheep, 150 days. Well no one thought that the government was going to be a lion or a bear but some of us held to the strange belief that maybe this time around the cabinet formation process in Lebanon will take a small stand for sovereignty, for independence , for democracy and above all for dignity. But that was not to be and not because the FPM lead by General Aoun was setting impossible demands. The real power behind the thrown, as we have discussed in this space many times before, is Hezbollah. Mon general was the message carrier, no more and no less. The opposition led by Hezbollah could have played a healthy and constructive role by announcing that the losers of the parliamentary elections would occupy the honorable seats of the loyal opposition until the next elections when the electorate is to decide who is to represent it. Unfortunately that is not the way that Qom understands democracy. To them the Grand Ayatollah is the undisputed leader, he is authority and everyone else follows orders.

But isn’t it only natural for Hezbollah and its allies to try and get from the other party, March 14, as much as they can if they play their cards of obstruction and intimidation correctly. Of course it is natural for them to push their agenda and take advantage of their opponents’ inexperience, weakness and lack of resolve. Hezbollah cannot be blamed for acting rationally and making masterful moves in order to gain the upper hand in their negotiations. They have simply outsmarted and out maneuvered the other side.

So is the whole blame to rest on the shoulders of the ineffective leaders of March 14, as well meaning as they might be? Not totally. It has been obvious from the first day of becoming the designate prime minister that Sa’ad Hariri will not rise to the challenge. He and all his followers made the fatal strategic error of telling the other side what their ultimate goal is going to be, a national unity government. As soon as they made that declaration they lost total control of the process and became hostage to the whims of the opposition as they were personified by Mr. Aoun with the backing of Hezbollah. Can you imagine the commercial fate of a merchant in a bazaar who tells a client that he will accept to sell a fifty dollar item for ten but then proceeds to ask for 25 dollars? Once the goal is revealed then any advantage that the seller had evaporates. That was exactly why Mr. Hariri et al were plucked alive.

Despite all of the above the root cause of the lengthy gestation and the docile and harmless sheep that was born is not the opposition neither is it totally the incompetence of the majority leadership. The real culprit of this crime is the Lebanese citizen. Yes, it is you and I that have enabled this charade to go on and have refused to act as responsible citizens that demand accountability. We have never shown outrage, we keep reelecting the same cast of characters that we complain about and we have accepted political sectarianism. If we are to be a nation of sheep then we do not have the right to expect a cabinet that represents our dreams and aspirations. Yet, it wouldn’t be fair on such an auspicious occasion but to wish Mr. Hariri and all my fellow Lebanese citizens a peaceful, just, prosperous and sustainable future under this cabinet, as unlikely as that might be.