The Arab Countries And Copenhagen

by yalibnan
790
By Ghassan Karam The peace Nobel laureate, Desmond Tutu a South African cleric, sent a letter to the EU parliament in which he berated them for not acting to slow down climate change.
Share: 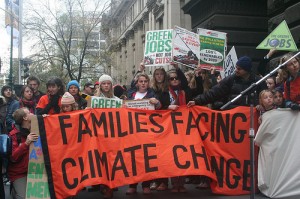 The peace Nobel laureate, Desmond Tutu a South African cleric, sent a letter to the EU parliament in which he berated them for not acting to slow down climate change. Mr. Tutu said in his letter ” The rich world is historically responsible for the emissions causing climate change and they have a moral obligation to provide the means for the countries on the front line to survive and prosper.”

Mr. Tutu was in effect urging the countries of the North to overcome their differences and to live up to their responsibilities by agreeing during the Barcelona negotiations to find a way out of the current impasse before Copenhagen . The developing countries have made it clear that they need financial assistance of around $148 billion a year by 2020 if they are to do their part of reducing their expected carbon footprint.

But since climate change is a global issue then it does require a global solution. Again it seems obvious that we cannot have a global solution if the largest, well second largest , emitter is not ready to participate in the game. Copenhagen is exactly one month away and the US climate change bill is still languishing in the Senate sub-committee. Senator Boxer , the chair of the sub-committee in question, remains hopeful that a bill will be ready prior to Copenhagen. That is not assured because a number of the Republican senators promise not to attend the committee mark up sessions. If they do not attend then the bill will not be able to make its way to the Senate floor. Even if a bill is to emerge some very powerful Democratic senators such as Max Baucus promise the bill by withholding funding for the measure. What is even worse are the proposed targets. Kyoto which was initially agreed to by the US was to cut carbon emissions by 5 % from the 1990 level by 2012. The US is estimated to have released around 5 Billion tons of carbon in 1990 and thus the implicit target by 2012 would have been 4.75 billion tons.The new bill is aiming for a 20% reduction from the 2005 levels by 2020. Since the 2005 emissions are estimated to be 6 billion tons then a 20% reduction will simply take the US back to 4.8 billion tons by 2020. That is a big setback and a cruel joke to the aspirations of those who take the existential problem posed by climate change seriously. The US is targeting to potentially reach by 2020 a level of emissions that it was supposed to have hit by 2012. That is anything but responsible . But let us not forget that responsibility is a two way street, responsible behaviour implies reciprocity. But alas the top four carbon emitters in the world; on a per capita basis; are Arab countries. Yes , we are a part of the problem but unfortunately we have thus far refused to do anything about it.

Mr. Yao de Bar, the UN Climate Change Secretariat said it best when he stated the need to “Step back from self interest and let common interest prevail” Nothing else will work. We are all in this together, like it or not. Climate change is a global problem that does not recognize political ,ethnic or religious boundaries.

A Podcast of the above has been posted to: ramblings11.mypodcast.com