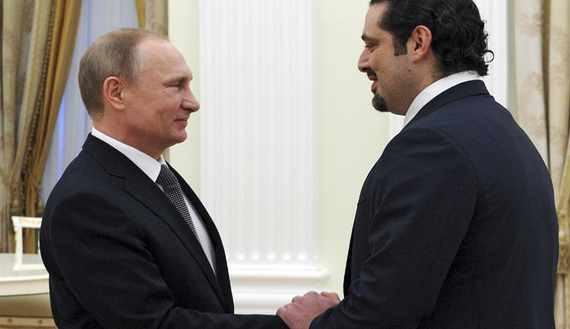 The visit of Lebanon’s Prime Minister Saad Hariri to Moscow and his meeting with President Vladimir Putin next Monday carries several revealed titles, such as supporting the Lebanese Army to face terrorism and discuss the Syrian refugee crisis in Lebanon.

The visit also carries concealed political headings, which are very sensitive to Kremlin.

Putin and Hariri are expected to tackle the fate of head of the Syrian regime Bashar al-Assad in the transitional political phase in Syria.

Observers close to Hariri do not deny that the prime minister’s mission in Moscow would be difficult, as Hariri might not be capable to convince Putin to give up on Assad.

For his part, member of the Future parliamentary bloc MP Okab Sakr said that Hariri’s visit to the Russian capital plans to mainly discuss the Lebanese situation, considering that Moscow is now a main player in the Middle East and the Arab world.

“Hariri hopes that Russia plays a positive role in the region, which would also reflects positively on Russia itself,” Sakr told Asharq Al-Awsat on Monday, adding that the prime minister’s talks in Moscow will push in this direction.

The deputy spoke about the importance of improving relations between Beirut and Moscow.

Despite the difficulty to change Russia’s position vis-à-vis Assad’s presence in Syria, Sakr uncovered that “in the backstage, the Russian leadership knows that Assad has no role in the future of Syria, but the problem lies in who will replace Assad during the transitional phase.”

He said that Hariri has no illusion that he could change the position of Putin, but, at least the prime minister will show the Russian president the dangers of keeping Assad and their repercussions on the future of both Syria and Lebanon.
Asharq Al-Awsat