Hurricane Irma: Everyone from Florida to the Carolina coast watching this storm 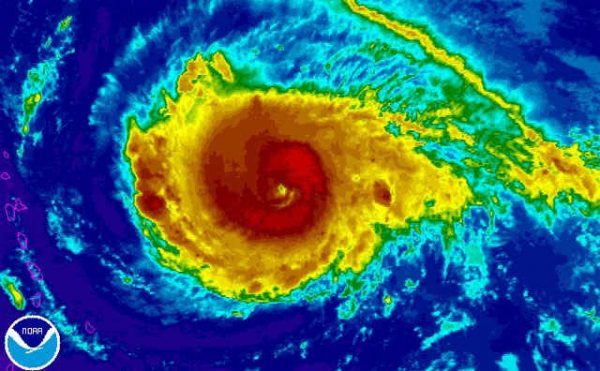 Hurricane Irma has strengthened overnight with sustained winds now at 145 mph. The upgrade in intensity was courtesy of Hurricane Hunter aircraft data gathered on a reconnaissance mission inside the storm.

As of 2 a.m. Tuesday morning, Irma’s movement remains west at 13 mph, unchanged from the 11 p.m. advisory. The storm’s central pressure is being listed at 939 millibars, that’s down modestly from where it was on Monday morning.

What is new in the 11 p.m. advisory on Monday night is the forecast cone. It is now larger and includes all of Southwest Florida. It’s important to remember forecast cones change based on storm movements and incoming data, but as time has gone on, a U.S. landfall appears increasingly likely. Everyone from the Gulf coast of Florida to the Carolina coast need to monitor this storm with vigilance.

The NHC issued hurricane warnings for Puerto Rico and the Virgin Islands.

Irma continues to look impressive on satellite imagery, having gone through another eyewall replacement cycle earlier on Monday. The hurricane is moving into a favorable environment for tropical weather with low wind shear and warm water, meaning further strengthening is likely.

Water ocean temperatures above 80 degrees and low wind shear (weak to little increase in speed or change in direction with height) are conducive for tropical features like Irma to remain healthy or grow stronger.

Given the forecast cone includes some of Florida, the hurricane is being watched very closely. It’s important to remember forecast cones change based on storm movements and incoming data, but as time has gone on a U.S. landfall appears more likely than it has at other points in time over the last three days. Everyone from the Gulf coast of Florida to the Carolina coast need to monitor this storm with vigilance.

There are still a number of scenarios on the table for Irma after we move through the next five days.

It is important for Southwest Floridians to know that should Irma hit our area the greatest impacts would not be expected until late in the upcoming weekend toward Sunday.

Now is the time to just be prepared, not to panic.

Living where we do in the world, your hurricane plan should already be in place. This includes having a stocked hurricane supply kit including items like water, batteries, food and clothing.

This week is going to be information overload on Irma, so you want to be sure you’re getting your information from a reliable source. The NBC2 First Alert Hurricane Tracking Team will continue giving you frequent updates online, on the air, and on social media.

You can expect updated forecast cones and advisories from the National Hurricane Center every 6 hours, at 5 a.m., 11 a.m., 5 p.m. and 11 p.m. Intermediate advisories are posted between the full updates offering a status report on how the storm is doing in the meantime.