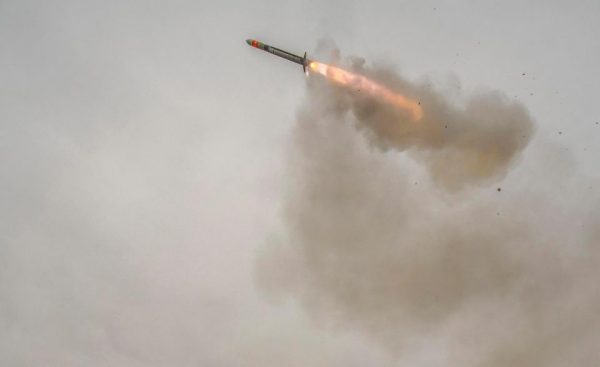 Sea Ceptor missiles are being introduced by the UK amid growing global tensions
Share:
The British Royal Navy has been testing its new air missile defence system on a boat headed for Japan as tensions with North Korea continue to escalate.

Images and footage show the Sea Ceptor missiles being fired from HMS Argyll, a Type 23 frigate, off the coast of Scotland.

The tests have been carried out after Kim Jong-un recently test-fired two Hwasong-14 intercontinental ballistic missiles (ICBM), in addition to the purported hydrogen bomb test which caused a major earthquake at the weekend.

The missile has an estimated range of more than 10,000 km (6,210 miles), putting London within striking distance and New York and Washington nearly within reach.

Experts worry the secretive country could eventually develop a long-range missile tipped with a nuclear warhead capable of hitting countries as far away as the US or UK.

Sea Ceptor can intercept and destroy enemy missiles travelling at supersonic speeds and will form part of the protection for the new aircraft carriers.

The system uses a missile capable of reaching speeds of up to Mach 3 – three times the speed of sound.

It will be able to deal with multiple targets at the same time, protecting an area of around 500 square miles over land or sea.

HMS Argyll will conduct further firing trials of the Sea Ceptor’s system before she deploys to Japan next year.

Harriett Baldwin, minister for defence procurement, announced the successful firings during a visit to defence company MBDA in Filton, Bristol.
“Sea Ceptor will protect our interests against threats both known and unknown,” she said.

“It will launch from the Royal Navy’s new Type 26 frigates as they keep our nuclear deterrent submarines and the UK’s two new aircraft carriers safe on operations around the globe.

“Sea Ceptor supports 600 UK jobs and is yet another example of how our rising defence budget is being spent on cutting-edge kit to help our Armed Forces meet future threats.”

Sea Ceptor is being fitted to replace the Sea Wolf system on the Type 23 frigates.

The air defence system will be used on the new Type 26 frigates and Land Ceptor, which will replace Rapier for the British Army.

Commander Toby Shaughnessy, the Commanding Officer of HMS Argyll, described the system as an “exciting upgrade”.

“Sea Ceptor is an impressive and innovative system, demonstrating that the Royal Navy is at the cutting edge of technology and working hard to keep Britain safe,” he said.

“I am immensely proud of my ship’s company and the work they put in to make this test firing possible.”

North Korea tested its first Hwasong-14 missile on July 4 and followed it up with more successful test on July 28, with the projectile flying 1,000 km (620 miles) before crashing into the sea.

South Korean officials believe that a third ICBM test could take place as early as this weekend.

The Hwasong-14 is the longest range ballistic missile North Korea has ever tested and is the first ICBM it has flown, according to the CSIS Missile Defense Project.

Based on the July 28 test, it has an estimated range of more than 10,000 km, making it capable of reaching most of the continental US.

Maps drawn by experts have also put the UK within that range.

Kim Jong-un’s regime claimed on Sunday that it had tested a hydrogen bomb and that it was a “complete success”.

South Korean spies believe the North is planning to fire another missile, possibly an ICBM, and the launch could take place on or around Saturday.

In response to the nuclear test, South Korea carried out live-fire missile drills and the US could move an aircraft carrier and bomber jets to the region.
Mirror . UK