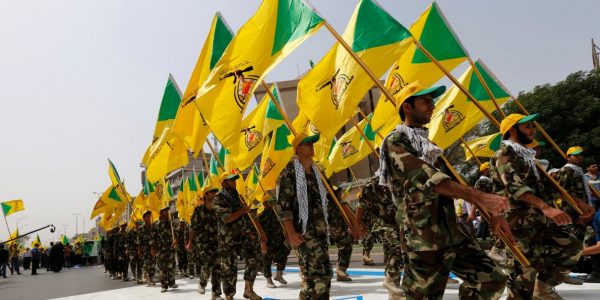 Iran-backed Shiite militant groups from Lebanon and Iraq are deploying hundreds of additional fighters to front lines in the Syrian city of Aleppo, Iranian media and militia officials said Monday, after Syrian rebels breached a government-imposed siege and cut a key government route to the contested city over the weekend.

The reinforcements by at least four groups, described by officials and state media as “elite,” will shore up Syrian President Bashar Assad’s forces there as fighting over control of the city intensifies.

Rebels breached the Syrian government siege on opposition neighborhoods in the city of Aleppo Saturday, opening a corridor in the south and marking a major military breakthrough. The push prompted an intensive airstrike campaign Sunday as insurgent groups put up a massive defense to protect the new corridor and gain new ground.

The battle for Aleppo, Syria’s largest city and former commercial heart, is pivotal for the Syrian civil war. It is not clear whether the rebels would be able to keep their new gains, but the breach causes a dent in the Syrian government’s new confidence and territorial expansion, bolstered by Russian air support. The city has been divided into rebel and government-held parts since 2012.

The semi-official Iranian Fars News Agency said the Lebanese militant group Hezbollah had deployed fighters from its Radwan division to a government-held neighborhood in Aleppo. The Beirut-based group does not comment on its military operations.

Reinforcements are also arriving from Iraq via Iran from the Iraq-based Hezbollah Brigades, Asaib Ahl al-Haq, and al-Nujaba militias, militia officials told The Associated Press. The Hezbollah Brigades have deployed some 1,000 fighters on Sunday, an official said. The al-Nujaba militia announced on its Facebook page that it sent 2,000 fighters. None of the militias’ officials agreed to speak on record, saying they were not authorized to give press statements.

The battle for Aleppo has triggered one of the largest mobilizations of fighters in Syria’s civil war, with an estimated 5,000-8,000 fighters taking part on the rebel side.

Syria’s pro-government Al-Watan newspaper also said Monday that the Syrian army and its allies had brought “necessary” military reinforcements to recover areas it withdrew from after it carried out a “redeployment in the area.”

The leader of a Syrian opposition group, Anas al-Abdah, meanwhile, hailed the breaching of the Syrian government siege on opposition neighborhoods of Aleppo as “miraculous.”

“Because our fighters are not only facing the Syrian regime but they are also facing the militias, Hezbollah, Iranian militias and Russia,” he said at a news conference in Istanbul. “And the reason we managed to do that is simply because we, the revolutionary forces, decided to be united and act as united.”

Al-Abdah said after breaking the siege, the rebels were now moving on to a “new stage” that involves liberating the entire city, while a commander of the ultraconservative Ahrar al-Sham rebel faction, Hossam Abu Bakr, said the fighters were regrouping.

Syrian government officials meanwhile sought to reassure residents of Aleppo’s government-controlled western quarters that access has not been cut to the city and supplies are still arriving through an alternative route.

Aleppo governor Mohammad Olabi said at least 10 fuel tankers were able to reach the government side of the city. He says consumer items would continue to be delivered to meet the residents’ needs.

A military officer says that trucks with food also entered the city, divided between government and rebel control, earlier in the day. The officer spoke on condition of anonymity because he wasn’t authorized to talk to reporters.

Activists said residents in opposition-held eastern Aleppo have yet to see humanitarian aid reach their neighborhoods despite the rebel advance, which punctured a government blockade against the eastern quarters.

Osama al-Ezz, a physician working in the Aleppo countryside, said a nominal amount of relief has reached the formerly besieged quarters, but “not enough for empty stomachs.” He said fighter jets were targeting all vehicles that try to enter the area through the new route carved out by rebels last weekend.

A physician inside the city, Farida, who declined to give her last name out of concerns for her family’s safety, said prices for basic goods inside eastern Aleppo remain inflated due to the siege-like conditions.

The International Committee for the Red Cross told the AP that eastern Aleppo was still inaccessible to its trucks. It said no aid convoys to the opposition area were forthcoming. The relief agency helped thousands of residents displaced in last week’s fighting settle in the government side of the city, spokeswoman Ingy Sedky said.

Also Monday, six long-range Tu-22M3 bombers took off from Russian territory and carried out strikes on the Islamic State group in areas east and northwest of Palmyra, near Sukhna and Arak, according to a Russian Defense Ministry statement.