Full text of joint communique on Syria talks in Vienna 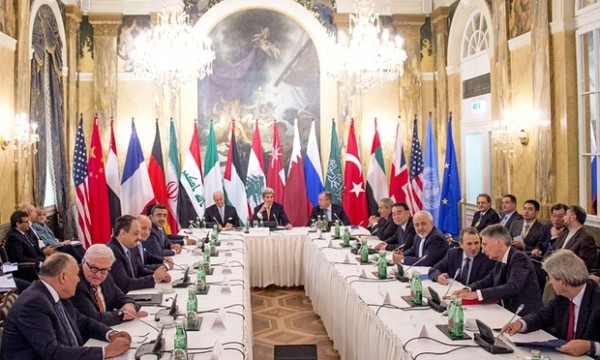 Following is the full text of a joint communique issued on Friday after ministerial talks on a political solution to the Syrian civil war as agreed by 17 countries, the European Union and the United Nations.

Meeting in Vienna, on October 30, 2015, China, Egypt, the EU, France, Germany, Iran, Iraq, Italy, Jordan, Lebanon, Oman, Qatar, Russia, Saudi Arabia, Turkey, United Arab Emirates, the United Kingdom, the United Nations, and the United States [“the participants”] came together to discuss the grave situation in Syria and how to bring about an end to the violence as soon as possible.

The participants had a frank and constructive discussion, covering major issues. While substantial differences remain among the participants, they reached a mutual understanding on the following:

3. The rights of all Syrians, regardless of ethnicity or religious denomination, must be protected.

4. It is imperative to accelerate all diplomatic efforts to end the war.

5. Humanitarian access will be ensured throughout the territory of Syria, and the participants will increase support for internally displaced persons, refugees, and their host countries.

6. Da’esh (Islamic State), and other terrorist groups, as designated by the U.N. Security Council, and further, as agreed by the participants, must be defeated.

7. Pursuant to the 2012 Geneva Communique and U.N. Security Council Resolution 2118, the participants invited the U.N. to convene representatives of the Government of Syria and the Syrian opposition for a political process leading to credible, inclusive, non-sectarian governance, followed by a new constitution and elections. These elections must be administered under U.N. supervision to the satisfaction of the governance and to the highest international standards of transparency and accountability, free and fair, with all Syrians, including the diaspora, eligible to participate.

8. This political process will be Syrian led and Syrian owned, and the Syrian people will decide the future of Syria.

9. The participants together with the United Nations will explore modalities for, and implementation of, a nationwide ceasefire to be initiated on a date certain and in parallel with this renewed political process.

The participants will spend the coming days working to narrow remaining areas of disagreement, and build on areas of agreement. Ministers will reconvene within two weeks to continue these discussions.