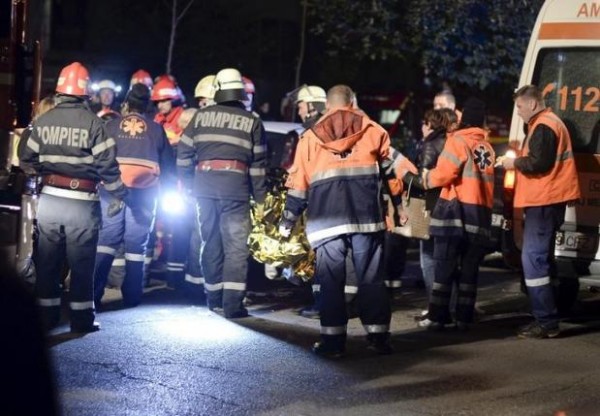 A fire and explosion in a Bucharest nightclub killed 27 people and injured 155 during a rock concert that featured fireworks late on Friday, Romanian government officials and witnesses said.

In one of the capital’s worst disasters in decades, about 400 people, mostly young adults, stampeded for the exit as the club filled with smoke.

Several witnesses said there were fireworks inside the club. Colectiv Club’s Facebook page said the show would feature pyrotechnic effects.

A pillar and the club’s ceiling went up in flames and then there was an explosion and heavy smoke, the witnesses said.

TV footage showed police officers and paramedics trying to resuscitate young people lying on the pavement while sirens wailed with more ambulances deployed to the scene.

“There was a stampede of people running out of the (Colectiv) club,” a man who escaped without shoes told Reuters.

A young woman who was released from the hospital after minor injuries described the club bursting into flames.

“In five seconds the whole ceiling was all on fire. In the next three, we rushed to a single door,” she told television station Antena 3.

“The situation is slowly stabilizing … we have many people with burns, intoxicated with smoke and people squashed,” he said, adding many victims have no identification.

Deputy Prime Minister Gabriel Oprea said an investigation into the causes of the incident was already under way, and the health minister launched a public appeal for blood donations.

Romania’s President Klaus Iohannis said in a statement: “I want to assure you of all support from rescuing forces and ask you to trust they put all efforts to limit the impact of this catastrophe.”

An emergency meeting of cabinet ministers was set for early on Saturday to assess the incident.