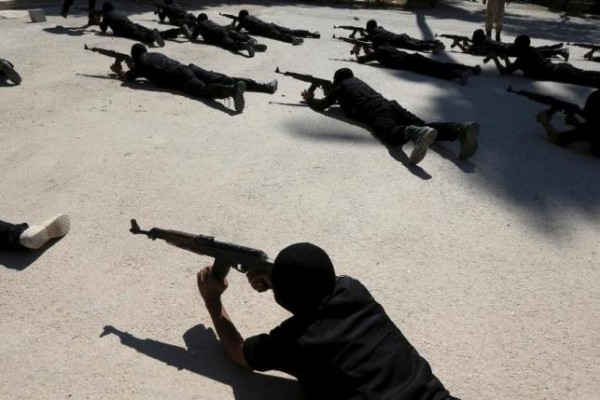 Rebel fighters aim their weapons as they demonstrate their skills during a military display as part of a graduation ceremony at a camp in eastern al-Ghouta, near Damascus, Syria July 11, 2015. REUTERS/Bassam Khabieh
Share:
The United States disclosed plans on Friday to station the first American boots on the ground in Syria in the war against Islamic State fighters, saying dozens of special forces troops would be sent as advisers to groups fighting against the jihadists.

Washington announced the small ground force shortly before 17 countries, the European Union and the United Nations called for a nationwide truce in Syria’s civil war at talks in Vienna, attended for the first time since the conflict began in 2011 by President Bashar al-Assad’s ally Iran.

The participants, including the United States and Russia, said “substantial differences remain” though they agreed it was “imperative to accelerate all diplomatic efforts to end the war” and the ministers will reconvene within two weeks.

In a rare hint of diplomatic progress, Tehran signaled it would back a six-month political transition period in Syria followed by elections to decide Assad’s fate, although his foes rejected the proposal as a trick to keep the president in power.

In addition to Assad’s fate, on which delegates said no breakthrough had been expected, sticking points have long included the question of which rebel groups should be considered terrorists and who should be involved in the political process.

In Washington, U.S. officials said the small special forces contingent in Syria would work with local “moderate rebel” groups to fight against Islamic State, also known as ISIS or ISIL, and that it should not be considered a combat mission.

“The president has been quite clear that there is no military solution to the problems that are plaguing Iraq and Syria. There is a diplomatic one,” White House spokesman

He said the special forces’ mission would be to “train, advise and assist” local groups.

Making clear they would number fewer than 50, he added: “I think if we were envisioning a combat operation, we probably would be contemplating more than 50 troops on the ground.”

The announcement marks a shift in policy by President Barack Obama.

Washington has targeted Islamic State with air strikes for over a year since fighters seized swathes of eastern Syria and northern Iraq and proclaimed a caliphate to rule all Muslims. But although it has acknowledged conducting special forces raids into Syria in the past, it has not stationed troops there.

The decision is part of a package of other steps to beef up the fight against Islamic State, including sending more warplanes to the region and discussing with Iraq the establishment of a special forces task force there.

The decision is part of a package of other steps to beef up the fight against Islamic State, including sending more warplanes to the region and discussing with Iraq the establishment of a special forces task force there.

For Syria, it is part of what U.S. officials call a two-pronged strategy of increasing aid to groups they describe as “moderate rebels” fighting against Islamic State, while also working on diplomacy to remove Assad from power.

TEHRAN MAY BE “READY TO MAKE A COMPROMISE”

U.S. Secretary of State John Kerry said in Vienna that the timing of the announcement, as talks were held in the Austrian capital, was a coincidence and that peace moves must continue.

“We can’t allow those differences to get in the way of the possibility of diplomacy,” he said.

Russia’s decision a month ago to join the conflict in Syria by bombing Assad’s enemies has upended the strategy of the United States and its allies, who say Assad must go, as his presence makes it harder to fight the jihadists.

Russia, which started bombing a month ago, says it is targeting only Islamic State. But the overwhelming majority of its strikes have been against other groups fighting against Assad, including some that are supported by U.S. allies.

For four years, Assad’s closest ally Iran had been excluded from international peace conferences because it rejected a U.N.-backed proposal for a transition of power in Damascus.

However, Tehran may be adjusting its stance in ways that could create more ground for compromise with Western countries.

“Iran does not insist on keeping Assad in power forever,” Iranian Deputy Foreign Minister Amir Abdollahian, a member of Tehran’s delegation at the Syria talks, was quoted by Iranian media as saying.

He later told Iranian state television that calls for a timetable for Assad’s removal had been rejected at the talks and added: “The importance of the Syrian people deciding their country’s fate was underlined.”

A senior official from the Middle East familiar with the Iranian position suggested Iran might go as far as ending support for Assad after the transition period.

“Talks are all about compromises and Iran is ready to make a compromise by accepting Assad remaining for six months,” the official told Reuters. “Of course, it will be up to the Syrian people to decide about the country’s fate.”

Assad’s foes said such a proposal amounted to no new concession from Tehran, because a new election could keep Assad in power. His government easily won an election last year.

Abu Ghaith al-Shami, a spokesman for the rebel Alwiyat Seif al-Sham group which is fighting in the south, said Assad’s participation in an election was unthinkable: “The fate of Assad and all criminals should be in court following the massacres committed by him and those with him, towards the Syrian people.”

Nevertheless, a commitment from Iran to a defined time limit for a transition could be viewed as a significant undertaking, potentially forming a basis for future diplomacy.

All previous efforts to find a diplomatic solution to Syria’s more than four-year-old civil war have collapsed over the insistence of the United States, European powers, Arab states and Turkey that Assad agree to leave power.

Russia’s participation in the conflict on Assad’s behalf creates a new incentive for a diplomatic push to end a war that has killed more than 250,000 people and driven more than 10 million people from their homes.

In the latest violence from the battlefield, a local rescue group operating in rebel-held areas said at least 57 people were killed by a government missile strike on a marketplace in a town near Damascus.