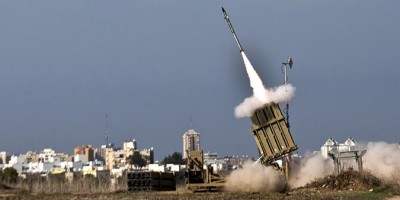 BY SHELLY PALMER
The politics of the conflict between Hamas and the State of Israel are well documented, and I’m sure you have already formed an opinion about who is at fault and what must be done. This article is not about any of that. It’s not about right or wrong, good or bad, politics or religion … it’s about a remarkable technology that is serving both a strategic and tactical purpose in an untenable, unsustainable situation.

In Arthur C. Clarke’s famous essay, “Hazards of Prophecy: The Failure of Imagination” he offers a “law” of prediction that posits, “Any sufficiently advanced technology is indistinguishable from magic.” If our imaginations don’t fail us, we can predict a defense system “so advanced” that enemy fire cannot penetrate it. Think of common arrows vs. suits of armor, or bombs vs. concrete-reinforced underground bunkers. That is the strategic idea behind Israel’s Iron Dome technology – protect Israel’s citizens and property by destroying enemy missiles in the air. Can Iron Dome technology really do that?

Developed by Rafael Advanced Defense Systems and first deployed by the Israeli Air Force in March 2011, the Iron Dome is a truck-towed mobile air defense system that counters short-range rockets and artillery shell threats. Able to work in any weather condition (including fog, dust, clouds and rain), the Iron Dome protects Israel’s northern and southern borders against rockets aimed at the country’s populated areas. Right now, it’s able to counter threats from about 40 miles away, but Israel wants to bump that up to about 160 miles – and also make it possible to take down missiles coming from two directions at once.

The Iron Dome was developed in the mid-2000s, after nearly 4,000 rockets landed in North Israel during the country’s second war with Lebanon in 2006. More than 4,000 additional rockets fired from Gaza landed in southern Israel between 2000 and 2007. After first coming up with the idea of an air defense system in February 2007, the first version was successfully tested in March 2009. In July 2010, the United States provided $205 million to help expand the effectiveness of the Iron Dome.

The Iron Dome is built around three basic elements: radar, a missile firing unit and a battle management/weapon control system. After initially detecting a rocket launch, the Iron Dome monitors the rocket’s path, analyzes the threat and calculates the point of impact. If the rocket is headed for a congested area, the Iron Dome then launches an interceptor to try to detonate the threat over a neutral area.

The Iron Dome is made up of “batteries,” which are trucks featuring radar and three launchers. By the end of 2012, Israel had five batteries. In September 2013, the country added a sixth. There are currently eight batteries protecting the country, but weapons scientist Richard Lloyd recently pointed to this number as one of the system’s major flaws – there just aren’t enough batteries to protect all of Israel.

But then, in November 2012, the Israel Defense Forces (IDF) tweeted that it had stopped 302 of the 846 rockets fired from Gaza; this figure far lower than 50 percent, but still effective in keeping out hundreds of missiles. This month, however, the IDF said it had intercepted just 27 percent of the 180 rockets fired at Israel from July 7-9.

Then again, those numbers may not necessarily be accurate. Bloomberg reports that Lloyd and “a handful of other outside experts, including Theodore Postol of Massachusetts Institute of Technology, have been challenging the IDF’s assertions on Iron Dome’s success rate since at least 2012.” Even if the Iron Dome “intercepts” the missile, Lloyd says it may not manage to detonate its warhead in mid-air, meaning it’ll still cause major damage once it lands.

Other Forms of Missile Defense

While the Iron Dome has plenty of room for improvement, Israel has other systems in place to protect its citizens from rocket strikes. The country has a tremendous early-warning system to alert its citizens to incoming missile strikes, and it’s also constructed a network of shelters for its citizens to take cover in. These factors are major reasons why so few Israelis have died from missile strikes (at least, in comparison to the number of rockets Hamas has fired).

It’s this warning system and network of shelters that are saving most Israelis’ lives, according to Theodore Postol, a professor of science technology and national security policy at MIT. Postol estimates the Iron Dome’s success rate is less than 5 percent – far lower than just about every other estimate.

The Iron Dome’s true success rate probably lies somewhere between Postol’s 5 percent estimate and the IDF’s 90 percent figure – but at the time of this writing, statistics are fluid.

Today, Hamas is firing relatively unsophisticated short-range missiles at Israel. The strategy is to intercept them in the air. The tactics are to deploy eight mobile defensive Iron Dome batteries along the front and keep the enemy guessing as to their locations while neutralizing as many incoming missiles as possible. In practice, this will work until Hamas obtains more sophisticated weaponry.

One day, a more advanced version of Iron Dome technology may be capable of destroying every single incoming missile. While that day cannot come soon enough, it is sufficiently far enough in the future for us to need a quick, peaceful resolution. For everyone’s sake, I hope that peace finds a way.