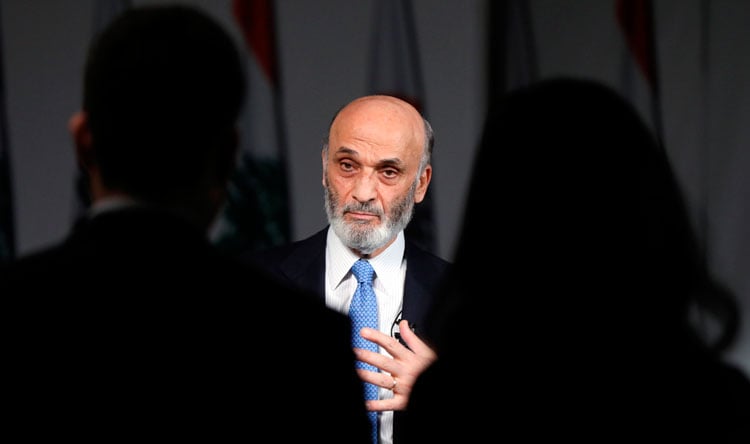 Lebanese Forces leader Samir Geagea declared on Sunday that “all political options are on the table to liberate Lebanon and its people from the hegemony of Hezbollah and its allies.”

“We will never accept any fait accompli and we will continue the struggle until we manage to build a fair and strong state under which we would all live freely,” Geagea said in a meeting with an industrial delegation from the Bekaa at his residence in Maarab.

“Accordingly, we have said and we will keep saying that we will not bow to any pressures and that all political options are on the table to liberate the country and the people from the hegemony of Hezbollah and its allies, or the Axis of Defiance which has led us into the inferno that we are in today,” Geagea added.

The LF leader stressed that the political problem in the country is “clear.”

“The solution to this problem would be the election of a sovereign, reformist president who would put the national interest first and work on the formation of a sovereign and reformist government that would work on approving reforms, rectifying the work of public institutions and combating all forms of corruption in them,” Geagea added.

Geagea had recently proposed that the country’s “political structure” should be changed if Hezbollah manages to impose the president it wants, prompting the Iran-backed party and some political forces to accuse him of seeking the country’s partitioning, a charge that has been denied by Geagea and the Lebanese Forces

Since the beginning of the 21st century, Iran has exploited elections in Iraq and Lebanon to control their parliaments and the top posts , with support from pro-Iranian militias , like Hezbollah in Lebanon and the Popular Mobilization Forces (PMF) in Iraq , this has enabled Tehran’s theocratic rulers to drive politics in both nations.

But Iran’s allies in these countries failed to gain majorities in the two most recent parliamentary elections, threatening Tehran’s hegemony in Baghdad and Beirut.

The election in Iraq took place in October 2021. The vote in Lebanon, happened in May 2022.

Like Iraq Lebanon has been witnessing for years the same problems in electing its top officials .

PSP leader Walid Jumblatt met for the second time last Thursday with a delegation from Hezbollah . During the meeting Hezbollah reportedly told Jumblatt that its only candidate is Franjieh .

The anti-Hezbollah leaders are hoping that Jumblatt will follow in his father’s footsteps , since Franjieh will be another rubber stamp for Hezbollah’s hegemony , like former president Michel Aoun before him. Aoun has been declared as the worst president Lebanon ever had

The late Kamal Jumblatt , was one of the most prominent and patriotic national leaders Lebanon ever had . He was assassinated by the Syrian regime of Hafez al Assad ( Bashar’s father) in 1977 .

Geagea condemns the burning of the Qur’an in Sweden

Earlier today Geagea, said in a statement on social media that “what the world witnessed in recent days of burning the Holy Qur’an in Sweden and attacking a church in the Congo is a violation of the nature of the civilized human role, and a violation of heavenly values, freedoms and sanctities.” It can only be placed in the context of wretched totalitarian projects.”