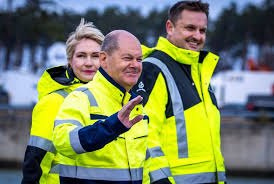 Germany on Saturday inaugurated its second liquefied natural gas terminal, part of a drive by Europe’s biggest economy to put reliance on Russian energy sources firmly behind it.

Chancellor Olaf Scholz took part in the ceremony in Lubmin on the Baltic Sea coast, which came less than a month after he inaugurated Germany’s first LNG terminal at Wilhelmshaven on the North Sea. Several more are expected to go online in the coming months, including another in Lubmin.

The terminals are part of an effort to prevent an energy crunch that also includes temporarily reactivating old oil- and coal-fired power stations and extending the life of Germany’s last three nuclear power plants, which were supposed to be switched off at the end of 2022, until mid-April.

Days after Russia invaded Ukraine in February, Scholz announced that his government had decided to build the first LNG terminals quickly.

Germany also worked to fill its gas storage facilities ahead of the winter. Last week, Germany’s network regulator said last week that a gas shortage was “increasingly unlikely” this winter.

Russia used to supply more than half of Germany’s natural gas but hasn’t delivered any since the end of August. It sent gas mainly through the Nord Stream 1 pipeline under the Baltic, which comes ashore in Lubmin.

“We are getting through this winter … gas supplies are not impaired and we can ensure them everywhere in Germany, differently from what many long feared,” Scholz said on Saturday. “An economic crisis also failed to materialize in Germany,” he added, pointing to government support programs, decisions to secure energy supplies and falling gas prices on global markets.

Scholz lauded the speed at which the first terminals were built and said a special regasification ship needed for Germany’s third terminal, at Brunsbuettel on the North Sea coast. will arrive next week.