Lebanon bank holdups: Who is the real criminal? 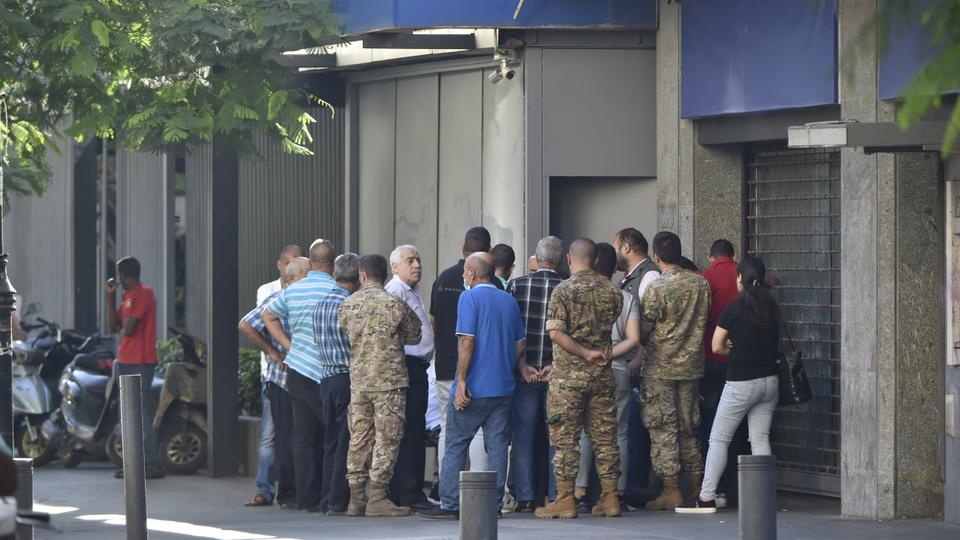 Lebanese depositors queue to withdraw money from an ATM machine outside a bank in Beirut on September 26, 2022 as banks partially re-opened following a week of closure due to security concerns.
Share:

Lebanon’s bank hold ups are the result of lawlessness created by banks, not desperate depositors.

Today, Lebanon has an enormous $72bn hole in its national finances. That figure alone, by any measure of the law, maths or logic should mean that Lebanon’s banks are bankrupt. Yet since the onset of the financial crisis, Lebanon’s banks and their supposed regulator, the Banque du Liban (BDL), have been making a bizarre ontological argument to avoid paying back their depositors and officially declaring bankruptcy.

Despite there being no official capital controls, more than 60 of the country’s commercial banks have adopted the policy that a US dollar is not really a US dollar if it was deposited into a Lebanese bank before the financial crisis. Instead, they claim, a pre-crisis dollar is equal to a Lebanese pound and can only be withdrawn at a severely reduced rate – some 95 percent less than the current value of an American dollar on the black market.

But any US dollars deposited to these same banks after the financial crisis would be “fresh” dollars, and thus, they can be withdrawn or exchanged with another currency at their real value at any time. Lebanese banks are basically claiming that not all debts to depositors are created equal.

Naturally, millions of Lebanese are not on board with this.

After enduring this absurd policy for three long years, a few desperate depositors have taken matters into their own hands.

There are near-weekly bank hold-ups across Lebanon, but with a twist: People have been threatening to use violence in banks not to steal other people’s money, but to obtain access to their own savings. Some believe, however righteous the depositors’ anger may be, threatening violence is a step too far. But when you think about how these people have lost their homes or found themselves unable to meet their families’ most basic needs, including food, education and medical care, – simply because a bank is not giving them access to their own money – it becomes hard to compare these acts to “normal” bank robberies.

In any country with a functioning social contract, the banking sector’s invented distinction between “fresh” and “old” money would have gone to court, and a sane judge would have ordered the bank to either pay up or declare bankruptcy – but not in Lebanon. In Lebanon, the judiciary is so scared to take on the banks – many of which are owned by political elites – that they are allowing the banks’ white-collar theft to continue, citing “exceptional circumstances”.

The bank hold-ups have already achieved some favourable results. Many of the depositors threatening the banks with violence have managed to retrieve large portions of their savings. And they are also forcing the bank’s creative accounting claims into a legal corner. In putting themselves on trial, depositors have brought banks’ indefensible policies and their complicity in what the World Bank deemed a “deliberate depression” under a legal spotlight.

The results of these trials are telling. Arrested depositors have not yet faced any formal criminal prosecution for their actions, with most receiving lenient punishments meted out in pre-trial negotiations. Judges have been lenient, and for good reason: After all, how can a judge deem it moral to severely punish someone for merely attempting to re-take what is legally theirs?

In response, banks have only been able to increase security at branches and implement strikes designed to pit the public against those conducting hold-ups.

Beyond that banks have few options, because there is only one way they can resolve the issues causing the hold-ups – by declaring bankruptcy and liquidating their assets to pay their debtors (ie depositors). However, under Lebanon’s Law No 2/67 (also known as the “Intra Law”) which governs the insolvency proceedings of Lebanese commercial banks, a bankruptcy declaration could lead to the liquidation of personal assets – yachts, cars, property – of bank executives, and the elites holding shares and management positions in these banks appear to have no intention of taking this risk.

It is not only Lebanese law that commercial banks are breaking by refusing to accept their liability against depositors and attempting to devalue their savings in order to save themselves. They are also breaking international banking regulations developed in the aftermath of the 2008 financial crisis. Indeed, even the International Monetary Fund has stated that any bank restructuring process should see small deposits (the vast majority of accounts) protected at full value.

Despite all this, the international community has taken no real action to stop banks from aggravating the suffering of the Lebanese people for their own benefit. There is no doubt that meaningful sanctions from the US or the EU would pressure the political elites protecting these banks to do the right thing and start the process of returning to the Lebanese people what is rightfully theirs.

While bank hold-ups provided some positive results for those desperate enough to attempt them, they also set a dangerous precedent – where vigilante action goes unpunished because the rule of law has already been undermined by banks’ illegal actions. In times of desperation, this only encourages people to turn to violence to reclaim what is rightfully theirs.

If the international community and the Lebanese judiciary do not act swiftly to bring Lebanese banks into line, the country will enter a cycle of violence it will struggle to break: there will be more bank hold-ups, more hunger, more cholera, more needless deaths and perhaps even active conflict.

If the international community, and the Lebanese elites responsible for this crisis, want to avoid this grim scenario, they should quickly develop a better ontological perception of who is stealing from who when banks’ crimes turn desperate parents into armed activists.