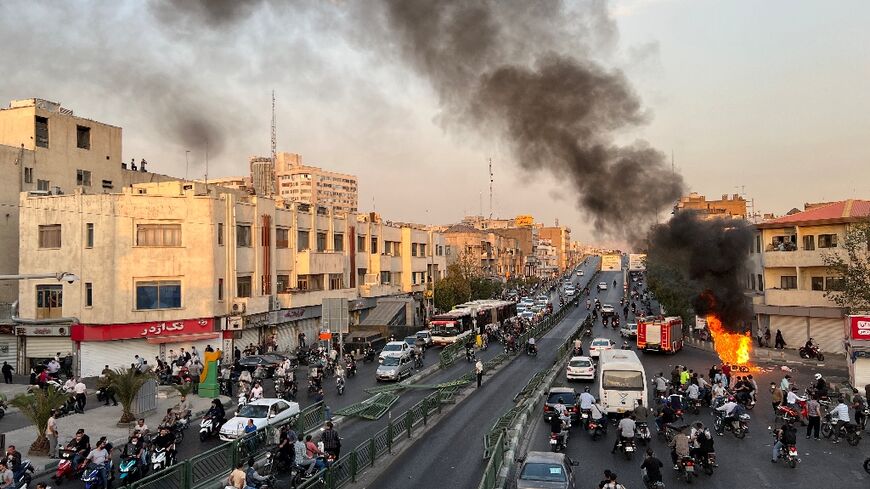 Iran has been torn by a wave of social unrest since the death of Mahsa Amini in police custody, three years after protests over a shock fuel price increase triggered a lethal crackdown – –
Share:

The protesters were responding to a call to commemorate those slain in the 2019 crackdown, giving new momentum to the demonstrations sparked by the death of 22-year-old Amini in mid-September this year, after her arrest for allegedly flouting Iran’s strict dress code for women.

In Tehran, the din of honking car horns reverberated as protesters blocked a major roundabout at Sanat Square and yelled “Freedom, freedom”, according to verified footage.

People later poured onto the streets of other cities, including Bandar Abbas and Shiraz, where women were seen waving their headscarves above their heads

As darkness fell, more people emerged onto the streets of the capital, some of them gathering around bonfires and chanting “Death to the dictator”, according to the 1500tasvir social media monitor.

“The government forces have directly opened fire in most of the cities where uprisings have taken place, such as Sanandaj, Kamyaran and Kermanshah,” Hengaw, a rights group based in Norway, told AFP.

“Two people have been killed by direct fire from government forces in Sanandaj and Kamyaran,” it said, adding that it was trying to confirm reports that more protesters were killed.

“Instead of opening space for dialogue on legitimate grievances, the authorities are responding to unprecedented protests with increasing harshness,” spokesman Jeremy Laurence told reporters in Geneva.

“This year is the year of blood, Seyed Ali will be toppled,” a large crowd chanted outside a Tehran metro station, in a video verified by AFP, referring to Iran’s supreme leader Ayatollah Ali Khamenei.

As the day began, shops were shuttered in Tehran’s famed Grand Bazaar and in other parts of the country, according to online videos verified by AFP.

Iranian media outlets said the bazaar’s merchants shut up shop for fear of them being torched, and a police spokesperson later told state television that 11 people had been arrested for “threatening” traders there.

In the province’s flashpoint city of Sanandaj, protesters were seen burning tyres in a street and chanting anti-government slogans, in other online footage.

“Woman, life, freedom” and “Man, homeland, prosperity,” chanted male and female students at Islamic Azad University in the northwestern city of Tabriz, in a video published by 1500tasvir.

The protests on Tuesday marked the third anniversary of the start of “Bloody Aban” — or Bloody November — when a surprise overnight fuel price hike sparked bloody street violence that lasted for days.

Amnesty International said at least 304 people were killed during the protests three years ago, but a tribunal in London this year by various rights groups said expert evidence suggested the toll was likely far more, possibly as high as 1,515.

Oslo-based group Iran Human Rights on Saturday said that security forces had killed at least 326 people, including 43 children and 25 women, in the crackdown against ongoing protests.

The unrest was fanned by fury over the dress rules for women, but has grown into a broad movement against the theocracy that has ruled Iran since the 1979 Islamic Revolution.

It has shown no sign of abating despite the authorities’ use of lethal force and a campaign of mass arrests that has snared activists, journalists and lawyers.

Former president and leading reformist Mohammad Khatami rejected the idea of a change of power in the Islamic republic, while admitting there was dissatisfaction with the current government.

“The overthrow (of the system) is neither possible nor desirable but the continuation of the current situation leads to social collapse,” Khatami, president from 1997 to 2005, was quoted as saying by reformist newspapers.

The European Union and Britain slapped sanctions on more than 30 senior Iranian officials and organisations over the crackdown.

Iran, which has accused the United States and its allies of fomenting the unrest, threatened to “respond effectively and forcefully”.

The US condemned cross-border drone and missile strikes by Iran on Monday against Iraq-based Kurdish opposition groups that Tehran accuses of stoking what it calls the “riots” at home.

The UN Human Rights Council is due to hold an urgent session on Iran on November 24, with backers pushing for an international investigation into the deadly crackdown on the protests.