Lebanon is definitely a failed state 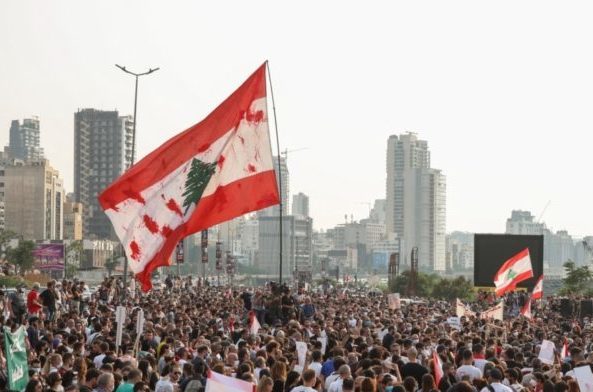 FILE – People gather during a protest marking the two-year anniversary of the August 2020 Beirut port blast, in Beirut, Lebanon, Aug. 4, 2022. The blast which was caused by the detonation of a stockpile of explosive chemicals that had been illegally imported and improperly stored, killed more than 220 people, injured thousands and destroyed entire neighborhoods of the capital. The Iran backed Hezbollah militant group has been for months trying to get Judge Tarek Bitar who is investigating the blast fired , reportedly because it is concerned about exposing its role in supplying the Syrian government with the explosive chemical for use in its barrel bombs against civilians
Share:

Please don’t get me wrong . I love Lebanon more than ever before but my most recent visit there left me with the impression that it is no longer a country in the real meaning of the word The institutions are in a coma and completely dysfunctional.

I just returned from a visit to Lebanon after an absence of 3 years due to the Covid 19 pandemic. I have to admit after touring the country for nearly two months that Lebanon is definitely a failed state. The Lebanese leaders who are the architects and beneficiaries of decades of corruption are not interested in implementing any reforms that benefit the people .

My niece K , who was concerned about my safety and security ( she has been hearing many stories about kidnappings and robbing of incoming tourists ) was kind enough to pick me up from the airport and take me to my car which was parked in our apartment in Beirut . Luckily the car was still there in my parking space but unfortunately it had a flat tire so my wife and my niece went and brought a mechanic to inflate the tire and test it for leaks . I brought with me a battery jump starter and since I had the battery disconnected while I was away the jump starter miraculously was able to restart the battery immediately .

From there I headed to our house in Mt Lebanon . The car needed badly a good wash but I decided to wait till I get to our favorite gas station near our home. I was shocked when I met Farhan , the son of the station’s owner . He told me the gas station has been closed for a year and went out of business . The bank reportedly refuses to let them withdraw any money from their accounts in order to buy the fuel needed . This is the station that has been there ever since we bought our house .

Needless to say I could not have a car wash

I was aware that the banks froze the accounts of individuals like me but I thought that businesses were still allowed to access their accounts .

The gas station was also my source of electric power during the period when the utility company had blackouts . I was shocked to find out that the utility company has not been providing any power for months and because of this Farhan who has an electric generator could only supply me with 5 hours of electricity from 7 pm till midnight . My wife and I realized right there and then that it will be impossible to go home and sleep there in the dark after being absent for 3 years

Farhan also told me that the wiring connecting his generator to our house was all stolen and that he had to install new wiring . He promised to do so asap .

We decided to check in at a hotel that I contacted prior to going to Lebanon ,but to my surprise it didn’t have power either .

My other niece L who lives in a beautiful mansion in the metn region of Mt Lebanon contacted us prior to visiting Lebanon and insisted that we should stay with them during our visit to Lebanon .

We could not call our niece because our phone line was disconnected . I purchased our mobile phone line for my daughter thirty years ago when she moved to Beirut to enroll at the American University of Beirut ( AUB) and for the past 22 years our bank has been handling our phone bill , but we discovered that it stopped paying the monthly fee to maintain the line without telling us and as a result of that the phone company canceled our line .

The mansion is so beautiful it can be used for any occasion involving hundreds of people .

It has a huge pavilion that can seat hundreds of people in an area overlooking a huge Infinity pool and built on a hill , surrounded by a garden that is hundreds of acres overlooking the nearby villages

The second day my niece invited all our close relatives to meet us for dinner and were all seated in the pavilion where they had a barbecue of all kinds of meat and vegetables
Unfortunately I was so excited that as I was climbing the stairs of the pavilion to meet my relatives I had a misstep and ended up falling back and fracturing my wrist .

After being pampered for 3 nights at the L and M mansion , we knew as soon as we left that we could not get used to this luxury and had to settle for a much more modest lifestyle .

We bought our house in the nineties . It was an old house built by a well known engineer as a model for a subdivision , which he never developed because of the civil war in Lebanon .

Unlike the L and K mansion our home is a modest Swiss chalet type surrounded by dozens of pine trees ,

When we bought it we discovered we could not make any structural changes because the engineer that built it thought about every little detail , so we ended up making all the changes outside in the front and the back of the house , since we only visited during the summer months and used the area for entertaining .

The first thing we did after we arrived home was hiring 3 people to clean the house and the front yard .

While the L ank K mansion had 24 hour electricity ( not from the utility company but from the solar powered system they installed which ended up costing them thousands of dollars ) our house had to settle for 5 hours of electricity ,

This meant that we could not use the refrigerator and therefore could not live a normal life .

Didn’t feel we were living a normal life at our home . All the time we felt like we were camping but luckily we had water all the time we were visiting , unlIke my sister who lived in a nearby village and who had to purchase a tanker of water every other day to water the garden and for daily use

We needed to get updated ID’s for our kids and ourselves . Went to Beit Eddine to apply for them and were shocked to find out that the ministry of interior’s office there had no stamps , no ink and no forms for issuing the ID’s

We found out that the stamp that uses to cost 1000 Lebanese pounds is now selling for anywhere between 70,000 and 80,000 pounds or liras on the black market because the government has not been printing any .

We needed several of these stamps but could not find them , so we could not apply for the ID’s and ended up leaving Beit Eddine in frustration .

Luckily the mukhtar of the village where I was born is a close relative of mine . She offered to personally go to Beit Eddin and apply for our ID’s using her own stamps without charging us a penny. She ended up saving us over a million Lebanese pounds

The banks were all closed for security reasons because several individuals tried by force to enter and withdraw their own money from the banks .

The banks in Lebanon have been treating depositors as their enemies and the only way to enter the bank was by setting up an appointment which meant callling several times and waiting for them to answer .

The branch I was dealing with was closed and is no longer in service . After several calls and phone messages I was able to set up an appointment with the manager of the new branch that now has our account .

I was shocked when I saw the statements of my accounts . The bank has been charging us so many fees on each account and at the same time has not been paying any interest . In other words have I not visited the bank the account would have been compleltly depleted because of the exorbittent charges

When I met the branch manger the first thing I asked him , “ how do you expect to stay in business if you treat your customers as your enemies . His shocking answer was : We are no longer in business because we lost all the trust of our customers can no longer open any new accounts . I asked him when the collapse is over and settled how do you expect to get back in business and his answer was : All the banks will eventually be acquired by foreign banks . So the customers who lost all trust in their own banks will be dealing with a Lebanese bank that has a new owner , which could be any of the international brands . For instance the. Sign on an Audi bank branch could read Audi -Chase . In other words you are no longer dealing with Audi but with Chase the new owners

Throughout our trip to Lebanon we never felt we were in a state . People in Lebanon got used to that and that is why they never count on the state to help them with anything .

For example we purchased a property 7 years ago and until now we could not register it in our name. Every time I ask I get a different excuse pointing to the lack of a state or properly run institutions .

Worst of all the people in charge of the country don’t even give a damn. They have been busy accumulating wealth by robbing the state and hiding their loot in foreign banks under various names

The absence of institutions is shocking . Never saw uniformed police or soldiers on duty . The only uniformed soldiers and police I saw were those hitchhiking because they could not afford the charges to get to their work place.

All government workers are paid in Lebanese currency which has lost over 96 % of its value .

Most of the salaries of government employees were not adjusted after the collapse of the currency . For this reason 80 % of the Lebanese fall below the poverty line according to the UN.

in Lebanon I discovered that there are 2 types of Lebanese

The very poor who can barely meet their daily needs and the lucky ones who get some help from relatives who live overseas , specially in the Arab Gulf countries like Saudi Arabia , Kuwait and the U A E where hundreds of thousands Lebanese expatriates live and work.

For those planning to visit Lebanon anytime in the near future , please don’t count on help from any of the institutions . Lebanon has become a no-state .

Having said all of that and having traveled the world several times I can say that Lebanon is still my favorite country and I encourage all the Lebanese Expatriates to visit their folks and offer any help they can …. they need us there