What to know about the Israel-Lebanon maritime border deal 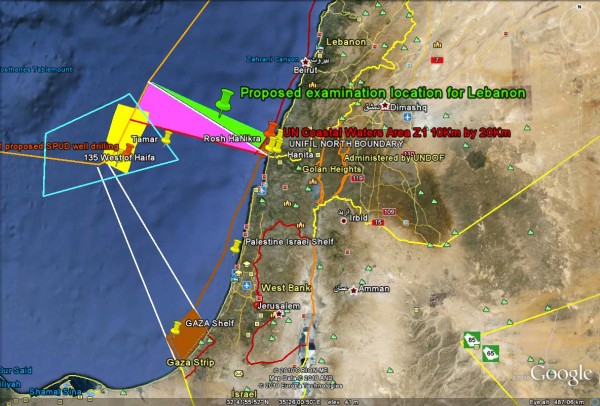 One study in 2008 pointed out that the Lebanese government would bring a return of almost $8 billion annually from first oil or gas discovery to the next 20 years. Unfortunately the Lebanese people should not count on any improvement in their living standards because the same thieves that stole their bank accounts will be. Stealing their energy resources
Share:

Israel and Lebanon, two countries technically at war, finally reached an agreement this week to end a long-running dispute over their maritime border, opening the door to offshore energy exploration in the Mediterranean Sea.

While the text of the US-brokered deal has yet to be officially made public, a leaked copy was widely circulated.

Lebanese President Michel Aoun on Thursday announced his country’s acceptance of the text brokered by Amos Hochstein, the US Department of State’s energy envoy, saying “this indirect agreement responds to Lebanese demands and maintains all our rights”.

Israel’s government voted on Wednesday to move forward with the deal, which is expected to be reviewed shortly by the Knesset – the parliament – without being brought to a vote.

Here is what you need to know about the border agreement:

How does it work?

The deal sets a border between Lebanese and Israeli waters for the first time, largely along a demarcation referred to as Line 23.

Lebanon had previously been opposed to bringing Line 23 to negotiations as it would have meant ceding part of the Karish field to the Israelis, sharing the Qana gas field, and reducing the areas of Blocks 8 and 9 that belong to Lebanon.

As Qana extends southward across Line 23, the deal allowed Israel to get a share of royalties through a side agreement with the Block 9 operator, the French company Total.

In the event of cross-border deposits being identified, the two parties agreed to mediate a solution through the United States.

The deal will take effect once Lebanon and Israel send letters to Washington, which will issue a notice announcing an agreement is in place. On that day, Lebanon and Israel will simultaneously – but separately – send the new boundary’s coordinates to the United Nations.

Both parties also agreed not to submit new charts or coordinates to the UN in the future unless they have been agreed upon bilaterally.

The maritime border was drawn from the sea, with the first five kilometres (2.2 miles) following the so-called “line of buoys” and then following along Line 23.

What are the loopholes?

The biggest loophole, experts said, is that the deal did not specify an arrangement on profit distribution but deferred agreeing on what royalties Israel will get from the Qana field to a future date.

Israel shall work with the Bloc 9 Operator in good faith to ensure that this agreement is resolved in a timely fashion,” the text of the leaked agreement reads.

Determining how Israel’s royalties will be calculated may not be as straightforward as it sounds, especially given that Lebanon’s energy minister said last month that it would take a 20-percent share from Russia’s Novatek in a consortium licensed to explore Bloc 9 – which lies in the disputed border area – and Bloc 4.

According to Marc Ayoub, associate fellow at AUB’s Issam Fares Institute in Beirut, the terms of the deal are tantamount to saying the development of the Qana field by Lebanon hinges on Israel’s deal with Total.

“What if this agreement with Total doesn’t work? Then all activities risk being halted,” Ayoub told Al Jazeera.

Cyprus and Israel, for instance, have been bogged down in negotiations for several years on profit distribution for the development of the Aphrodite-Yishai joint reservoir, most of which is located in the economic waters of Cyprus.

According to Mona Sukkarieh, political risk consultant and co-founder of Middle East Strategic Perspectives, the deal is “standard”.

This is not surprising in itself. Since a country holds sovereign rights to exploit resources in its EEZ [exclusive economic zone], it will have a say in the development of cross-border reservoirs that extend into its EEZ,” she said.

But the situation is made more complex by the “nature of relations between Lebanon and Israel, which rules out a unitisation agreement between the two countries and even joint development of cross-border reservoirs because Lebanon considers it as a form of normalisation”, Sukkarieh told Al Jazeera.

Who benefits from the deal?

In Lebanon, some observers have been disappointed. “Our expectation was that it would be a fairer agreement,” Ayoub said. “What we have seen is that it gives more advantages to Israel rather than Lebanon.”

Beirut demanded that Line 29 further south be the border. An agreement on Line 23 means a loss of approximately 1,800sq km (695sq miles), according to the energy expert. “It opens Lebanese maritime blocs for exploration, but it came at a cost,” said Ayoub.

With the Lebanese economy in complete collapse, Beirut sees the maritime deal as an opportunity to unlock foreign investment and lift the country out of its spiralling economic crisis.

However, the potential for gas exploitation to reduce a government debt of about $100bn is limited.

Qana has yet to be explored and sufficient quantities of gas to make extraction economically viable may not be found at the reservoir. In the best-case scenario – the discovery of more than 15 trillion cubic feet (424 billion cubic metres) of natural gas reserves – revenues could be up to $6bn over 15 years.

Assuming gas is plentiful, it will still take years before revenues reach state coffers. Some also fear the rampant corruption that has characterised Lebanon’s governing system may prevent the money from ever benefitting about three million people living below the poverty line.

Diana Kaissy, advisory board member at the Lebanese Oil and Gas Initiative (LOGI), told Al Jazeera that Lebanon does not have mechanisms, including a sovereign wealth fund and a fiscal act, to adequately govern the oil and gas sector.

Without reforms, “the money will likely be stolen,” Kaissy said.

On the other side of the border, Israel has largely been celebrating the deal. According to Asher Kaufman, director of the Kroc Institute for International Peace Studies at the University of Notre Dame, settling the maritime border issue gives Tel Aviv the green light to tap into Karish’s 2.4 trillion cubic feet (68 billion cubic metres) of natural gas without incurring in the wrath of Lebanon’s Hezbollah group.

In September, Hezbollah leader Hassan Nasrallah called the extraction of gas from Karish by Israel a “red line”. In turn, Israel’s defence minister Benny Gantz said if Hezbollah harmed its offshore rig, “the price will be Lebanon”.

Alongside easing regional tensions, the deal could also be a boon for Europe as it attempts to disengage from Russian gas over Moscow’s invasion of Ukraine. “Looking ahead, Karish could be another resource to cover European energy needs,” Kaufman said.

Why was there a breakthrough?

The agreement has been hailed as “historic” and mutually beneficial. It represents the first significant diplomatic breakthrough between the two countries in years.

After multiple failed US-brokered negotiations, a deal has come at “the right historical time for the wrong reasons”, Kaufman said, alluding to Lebanon’s economic woes and Israel’s political crisis.

Israel’s government is rushing to have the deal approved before a national ballot on November 1, its fifth election in less than four years. Prime Minister Yair Lapid, a centrist, said the deal must be passed by this time or the window might close.

The agreement has found opposition on the conservative front, with former Prime Minister Benjamin Netanyahu arguing it could benefit Hezbollah and accusing Lapid of evading parliamentary scrutiny.

However, once it is approved, the new administration will be unlikely to backpedal. “Too much is at stake here,” Kaufman said. “Not only the Israel-Lebanon relationship and the prospect of war, but also American diplomacy is on the line.”

Does this turn a page in Israel-Lebanon relations?

Lebanon and Israel have remained foes, but the deal removes a significant point of friction that could have led to a new conflict. Israel invaded Lebanon in 1982 and the two countries fought again in 2006.

Lapid said on Wednesday that the maritime agreement “staves off” war with Hezbollah. The Iran-backed political party and armed group, which sees Israel as its sworn enemy, notably did not oppose the deal despite its powerful sway over Lebanese politics.

Joseph Daher, author of Hezbollah: Political Economy of the Party of God, told Al Jazeera the group was likely more eager to negotiate because of the economic crisis weakening its ability to launch a war against Israel, as well as its grip on the country.

“Hezbollah’s struggle against Israel is subordinate to its interests in Lebanon,” Daher said.

The deal is, therefore, not an indication that ties between the two foes are being “normalised” as has been the case for a number of Gulf countries.

“There will not be any kind of direct contact between Lebanese representatives and Israeli representatives, they will always be entering negotiations with [a third party],” Daher said.

“No peace agreement will be signed in the foreseeable future.”