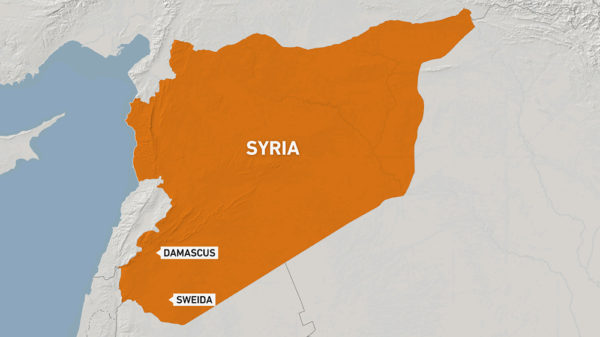 Sweida, The bodies of six men of pro-government gang captured during fighting in Sweida in southern Syria were found in the city centre on Friday, a war monitor and a local media outlet reported, raising to 23 the death toll from a rare outbreak of violence in the area.

Located within government-held Syria, the Druze-majority province of Sweida aka Jabal Al Arab has remained mostly shielded from the war that has splintered the country since 2011, but sporadic rallies have taken place over deteriorating economic conditions.

This week’s violence has pitted armed residents against gangs aligned with Syrian government security agencies, according to activists and local media.

The Syrian Observatory for Human Rights, a Britain-based organisation that reports on the war, said the six people whose bodies were found on Friday were members of a pro-government gang and they had been killed by gunfire.

Suwayda24, a local media outlet, also cited information that they were members of the pro-government gang who had been captured by groups that have being clashing with it this week. Nobody had claimed responsibility for the killings, it said.

The main frontlines in the Syrian conflict have been largely frozen for years. Syria is splintered three ways, with the government backed by Iran and Russia holding the bulk of the territory, Turkey-backed rebels in control of areas near the northern border, and Kurdish-led groups backed by the United ydb

File photos from the uprising . The Lower left shows the ID of Raji Falhous , the commander of the pro Syrian government gang that carried out arbitrary detentions, random roadblocks and kidnappings for ransom. Rayan Maarouf, an activist and head of the Suwayda24 local media outlet, told Reuters . Sheikh Yahya al-Hajar commander of local Druze militia composed of local residents of Sweida, and towns in the area  led the fight against Falhous and his pro Syrian government gang

Suwayda24 has described the Sweida violence as an uprising against gangs aligned with the security agencies.

Last weekend, the detention of one resident prompted others to set up informal roadblocks, detain members of government-backed gangs and besiege their bases, it reported.

The Syrian government has not commented on the violence.