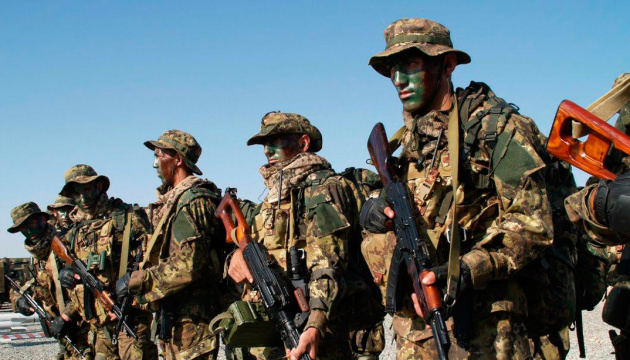 Russia is relying on mercenaries from the Russian private military company Wagner Group in its war against Ukraine as Russian infantry losses mount
Share:

Greater reliance on paid fighters from the Russian private military company Wagner Group for frontline duties rather than their usual work in special operations would be another sign that Russia’s military is under stress six months into its war in Ukraine, says Britain’s Ministry of Defense.

Russia has tasked mercenaries to hold sections of the frontline in Ukraine in a sign it is running short of combat infantry, Britain’s Ministry of Defense said on Friday, as Kyiv steps up a counter-offensive in the south.

Greater reliance on paid fighters from the Russian private military company Wagner Group for frontline duties rather than their usual work in special operations would be another sign that Russia’s military is under stress six months into its war in Ukraine.

But the British defense ministry said in an intelligence update that Wagner mercenaries were unlikely to make up for the loss of regular infantry units or alter the trajectory of Russia’s invasion.

“This is a significant change from the previous employment of the group since 2015, when it typically undertook missions distinct from overt, large-scale regular Russian military activity,” the ministry said on Twitter.

Wagner and the Kremlin were not immediately available for comment outside regular business hours.

Officials in Kyiv said on Wednesday they had observed a “massive redeployment” of Russian forces to the south where British defense officials believe Russia’s 49th Army, stationed on the west bank of the Dnipro River, is vulnerable.

The southern city of Kherson, key to Russia’s overland supply lines from Russian-annexed Crimea, was now virtually cut off from the other territories occupied by Russia, British intelligence said on Thursday.

Kherson region fell to Russian forces soon after they began what Moscow calls “a special military operation” on February 24. Ukraine describes Russia’s invasion as an imperial-style war of conquest.

The Ukrainian military has used Western-supplied long-range missile systems to badly damage three bridges across the Dnipro in recent weeks, making it harder for Russia to supply its forces on the western bank.

Ukraine said its planes struck five Russian strongholds around Kherson and another nearby city on Thursday, the focus of its biggest counter-offensive of the conflict.

Russia bombed Kyiv’s outskirts for the first time in weeks on Thursday. Fifteen people were injured when missiles hit military installations in Vyshhorod district on the edge of the capital, regional Governor Oleksiy Kuleba said on Telegram.

The attack shattered the sense of normalcy that has returned to life in Kyiv since Russian forces abandoned attempts to capture the city in the first weeks of the war.

More than 10 Russian missiles also hit the Chernihiv region northeast of Kyiv, regional Governor Vyacheslav Chausov told Ukrainian TV on Thursday. Like Kyiv, Chernihiv had not been targeted for weeks.

The North district command of the Ukrainian armed forces said more than 20 missiles had been fired at Chernihiv region bordering Russia from a base in Belarus – Russia’s ally.

Ukraine’s counter-attacks in the south have come as Russia continues to battle for control of the entirety of the industrialized Donbas region in the east, comprising the provinces of Donetsk and Luhansk.

Russian forces shelled the town of Bakhmut, which has been cited by Russia as a prime target in its advance through Donetsk, four times on Thursday, Donetsk regional governor Pavlo Kyrylenko said on Telegram. At least three people were killed and three were injured, he said.

As the fighting rages, international efforts continued to try to reopen Ukrainian ports and allow exports of grain and other commodities.

Allowing safe passage for grain shipments from Ukraine should ease shortages that have left tens of millions of people around the world facing soaring food prices and hunger.

Russia and Ukraine struck a deal last week to unblock grain exports from Black Sea ports, but UN aid chief Martin Griffiths said “crucial” details for the safe passage of vessels were still being worked out.

Griffiths was hopeful the first shipment of grain from a Ukrainian Black Sea port could take place as early as Friday.

Meanwhile, a Syrian ship under US sanctions docked in the northern Lebanese port of Tripoli carrying barley and wheat that the Ukrainian embassy in Beirut told Reuters on Thursday had been plundered by Russia from Ukrainian stores.

The Laodicea docked in Tripoli on Wednesday, according to shipping data website MarineTraffic.

“The ship has traveled from a Crimean port that is closed to international shipping, carrying 5,000 tons of barley and 5,000 tons of flour that we suspect was taken from Ukrainian warehouses,” the embassy told Reuters.

“This is the first time a shipment of stolen grains and flour reaches Lebanon,” the statement said.

Russia has previously denied the allegations that it has stolen Ukrainian grain. An official from the Russian embassy in Lebanon told Reuters it could not immediately comment.

A Lebanese official confirmed that the issue had been raised during a Thursday meeting with Aoun and noted Ukraine’s general concerns that Russia might try selling stolen Ukrainian wheat to a host of countries including Lebanon.

Lebanon’s economy minister Amin Salam told Reuters that the country’s customs authority and its agriculture ministry were following up on the issue.

Salam had said earlier on Thursday that severe bread shortages in Lebanon would be eased this week by new wheat imports, but did not say where they were coming from.

The agriculture minister, the head of customs and the head of Tripoli port did not immediately respond to requests for comment.

“We are checking the accuracy of the information that has been mentioned in the media, and we have laws and we resort to Lebanese law,” Lebanon’s transport minister Ali Hamie a close ally of the Iran backed Hezbollah militant group told Reuters. He also told local media that Lebanon is a sovereign country and it alone will decide what to do with regards to the shipment

A customs official and shipping source told Reuters that the Tripoli port had not offloaded the ship due to suspicions it was carrying stolen goods.

“Nothing was taken off of the ship – as soon as we got the information, we stopped everything,” the customs official said.

The Laodicea is one of a trio of ships owned by the Syrian port authority that Ukraine says have been transporting wheat plundered from warehouses in Ukrainian territory recently overtaken by Russia.

All three ships have been sanctioned by the United States since 2015.

When asked about the Laodicea’s docking in Tripoli, US State Department spokesman Ned Price said he could not comment on the specific vessel but said he could “confirm the fact that the Russians have pilfered grain belonging to Ukraine” in general.

The Laodicea’s arrival coincides with a new round of severe bread shortages across Lebanon, where a three-year economic crisis has slowed imports of subsidized wheat.

Bakeries were inundated this week with frustrated crowds in a country where about half the population is food insecure, according to the World Food Program.

Lebanon used to import about 60% of its wheat from Ukraine, but those shipments have been disrupted by Russia’s invasion and blockade of the main Black Sea ports through which Ukraine once exported.

Ukraine had resumed legal exports of wheat to Lebanon in mid-July, according to the Ukrainian embassy and the head of Lebanon’s mills association.