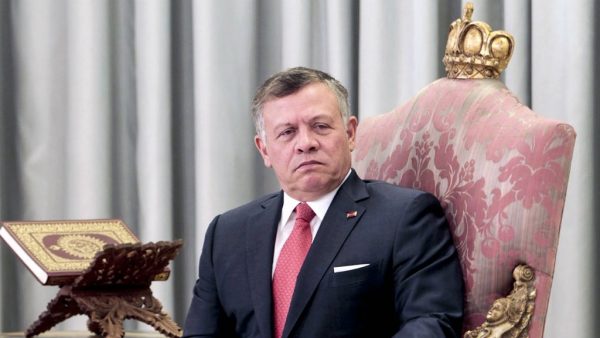 King Abdullah II protested in an interview published Sunday over attacks on Jordan’s borders by “militias linked to Iran”, following deadly clashes with drug smugglers on the frontier with Syria.

Jordan faces “regular attacks on its borders by militias linked to Iran”, he told Al-Rai newspaper.

Abdullah called for “a change of behaviour by Iran” and said that Jordan “does not want tensions in the region”.

“Jordan, like the rest of the Arab countries, seeks good relations with Iran, with mutual respect, good neighbourliness, respect for the sovereignty of other states and non-interference in their affairs,” the king said.

Abdullah said that Jordan, like other Arab nations, was being targeted by smugglers of drugs and arms that he said were in transit to Europe.

“Jordan is coordinating with its brothers (Arab countries) to confront this and protect its borders,” he said.

The Jordanian army conducts regular anti-smuggling operations on the border with Syria, where Iran-backed Hezbollah fighters support the Damascus regime in a civil war that erupted in 2011.

On January 27, Amman said its forces killed 27 drug traffickers supported by armed groups, seizing a large quantity of drugs. An officer and a border guard were killed in a similar clash earlier the same month.

According to organisations which monitor drug trafficking, the increasingly popular amphetamine-style stimulant captagon is produced in government-controlled areas of Syria and marketed almost exclusively in the Middle East by the Iranian backed Hezbollah militant group