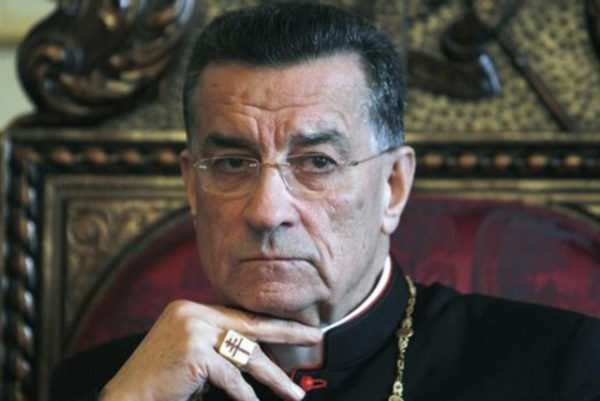 Lebanon’s Maronite Patriarch Beshara al-Rai blasted in his Sunday Mass sermon the measures taken against Archbishop Moussa al-Hage following his return from Israel. He said the measures violated the dignity of the church, and authorities’.
Share:

“What Archbishop Moussa al-Hage was subjected to has violated the dignity of the church, and authorities’ attempt to turn it into a merely legal issue is futile,” Lebanon’s Maronite Patriarch Beshara al-Rai said in his Sunday Mass sermon.

“It is unacceptable to harrass a bishop without consulting with his authority, which is the patriarchate. We reject these police-state actions that have political motives and we demand that everything confiscated from Archbishop Hage be returned to him,” the patriarch added.

Addressing those whom he said are “insulting Lebanon,” al-Rai said: “Stop saying that the aid is coming from collaborators and search for the collaborators somewhere else, because you know where they are and who they are ” a possible reference to Iran’s proxy Hezbollah whose leader pledged allegiance to Iran and its supreme leader.

Lebanese Maronite Archbishop Moussa El-Hage’s unexpected detainment earlier this week and his summons to court have made waves throughout the country’s Christian community and stoked fears that fresh political tensions will further destabilize Lebanon’s complex religious balancing act ahead of upcoming presidential elections.

El-Hage, who serves as the Maronite Archbishop of Haifa and Jerusalem (the Holy Land), was detained for eight hours at the General Security headquarters in the southern Lebanese city of Nakoura while returning to the country following a trip to Israel.

On orders by a pro-Hezbollah judge , Al Hage was arrested at the Ras Naqoura border crossing, which is reserved for clerics and the diplomatic corps, and underwent a lengthy interrogation about his relationship with the Lebanese diaspora in Israel, who took refuge there over fear for their lives by the Iranian backed Hezbollah militia after the Israeli army’s withdrawal in 2000 from the border strip it previously controlled.

According to Lebanese media, El-Hage’s passport and cell phone were confiscated, and he was forbidden to travel. Security forces also confiscated a large quantity of medicines, food items, and canned goods, as well as roughly $460,000 that El-Hage was transporting on behalf of Lebanese nationals in Israel, who wished to send the goods to family members struggling amid Lebanon’s ongoing financial woes.

Though he was eventually released with the help of Patriarch Raï, as well as top judicial authorities, El-Hage was issued a court summons for last Wednesday which he ignored

After the incident, the Vatican’s envoy to Lebanon, Maltese Archbishop Joseph Spiteri, made comments to a local television station calling El-Hage’s arrest a “dangerous” precedent.

Lebanese politician Samir Geagea, leader of the Lebanese Forces party, also weighed in, saying last Tuesday that El-Hage’s detainment was “not comprehensible at all.”

“Visiting Maronite monasteries in the Holy Land and looking after their affairs is at the heart of his mission as the Patriarchal Exarch of Jerusalem and Palestine and Jordan,” Geagea said of El-Hage.

The summoning of El-Hage for interrogation at Lebanon’s Military Court “is not based on a certain suspicion, evidence or proof,” he said, asserting the move was more likely intended as “a message to His Eminence Patriarch Beshara al-Rahi based on his patriotic stances.”

For months, Raï has been calling for a neutral head of state as Lebanon struggles to form a government following May’s parliamentary elections and as the country prepares for presidential elections later this year.

If Lebanon is to overcome its political and economic troubles, it needs a president who is “politically committed and experienced, courageous and bold, a statesman who is neutral in its integrity and is guided by its patriotism,” and who knows how to stand “above the alliances between the parties and the dialectics between the opposing political axes,” Rai was quoted as saying on July 10 in reference to the upcoming presidential election.

A- Rai Rahi on Sunday also blasted those who “fabricate cases,” in reference to the measures that were taken against the Maronite Archbishop.

On July 21 the Maronite Church demanded that Judge Fadi Akiki, who is closely associated with Hezbollah and who ordered the detention and interrogation of the Archbishop , be brought before the Disciplinary Board of the Judiciary and dismissed from office.