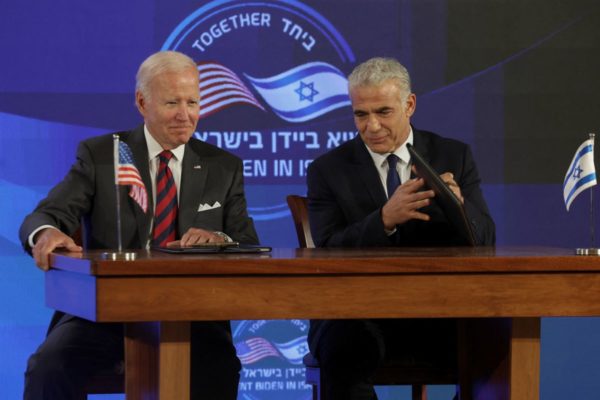 The undertaking, part of a “Jerusalem Declaration” crowning Biden’s first visit to Israel as president, came a day after he told a local TV station that he was open to “last resort” use of force against Iran – an apparent move toward accommodating Israel’s calls for a “credible military threat” by world powers.

“We will not allow Iran to acquire a nuclear weapon,” Biden told a news conference following the signing of the declaration.

Washington and Israel have separately made veiled statements about possible preemptive war with Iran – which denies seeking nuclear arms – for years. Whether they have the capabilities or will to deliver on this has been subject to debate, however.

Thursday’s statement reaffirmed U.S. support for Israel’s regional military edge and ability “to defend itself by itself”. Widely believed to have the Middle East’s only nuclear arms, Israel sees Iran as a existential threat.

“The United States stresses that integral to this pledge is the commitment never to allow Iran to acquire a nuclear weapon, and that it is prepared to use all elements of its national power to ensure that outcome,” the statement added.

Lapid cast this posture as a way of averting open conflict.

“The only way to stop a nuclear Iran is if Iran knows the free world will use force,” he said after the signing ceremony.

Speaking alongside him, Biden described preventing a nuclear Iran as “a vital security interest for Israel and the United States and, I would add, for the rest of the world as well”.

In 2015, Iran signed an international deal capping its nuclear projects with bomb-making potential. In 2018, then-U.S. President Donald Trump quit the pact, deeming it insufficient, a withdrawal welcomed by Israel.