Macron accuses Russia of using its gas as a” war weapon ,”says France to do without it 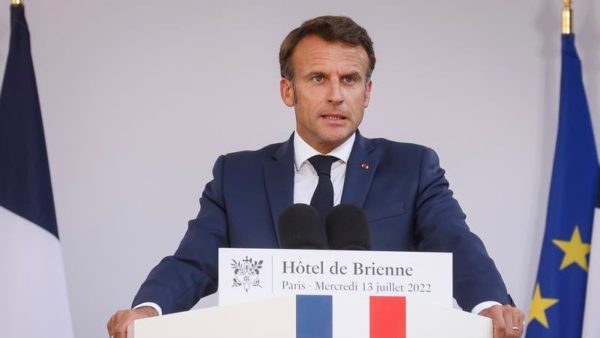 French President Emmanuel Macron delivers a speech to military officials and guests at the Ministry of Armed Forces in Paris, on July 13, 2022, on the eve of Bastille Day. (Pool/AFP)
Share:

President Emmanuel Macron said Thursday that France aims to manage without Russian gas as soon as possible with no early end to the war in Ukraine in sight.

Accusing Moscow of using energy deliveries to the West as “a weapon of war,” Macron said in a TV interview that France was already diversifying the sources of its energy supplies, and building stocks ahead of next winter.

“Russia has already started to cut off gas supplies” by closing the Nordstream 1 pipeline, he told the TF1 channel, referring to Russia’s interruption of supplies which it said was for maintenance reasons.

“That’s a very clear message: It will use gas as a weapon of war,” he said.

“We will need do without Russian gas completely.”

France is estimated to receive less than 20 percent of its total gas imports from Russia.

Transitioning away from Russian energy meant that “the summer and the start of the autumn will probably be very tough,” Macron warned.

Even in the event of prolonged conflict in Ukraine, Macron said that France would continue to help Kyiv defend itself against Moscow while also sticking with sanctions against Russia.

“We want to stop this war without going to war ourselves,” he said.

France was boosting gas supplies from Norway, Qatar, Algeria and the United States, Macron said, and building up gas reserves which will be “be near 100 percent by the autumn.”

Noting that France’s energy use had already “diminished a little” compared to a year earlier, Macron called on authorities, consumers and industry to save energy and eliminate sources of energy waste.

“We need to enter a collective logic of restraint,” Macron said.

The government would serve as an example for private-sector actors “by making sure that we consume less energy.”

He said “this restraint will require solidarity from our fellow citizens.”

Using less energy was a good thing both “for the climate and also for our energy independence.”

Macron also confirmed that France would invest more in the nuclear energy sector, which currently provides around 70 percent of the country’s electricity needs.

“Nuclear energy is a sustainable solution,” he said, “both for France and for other countries.”