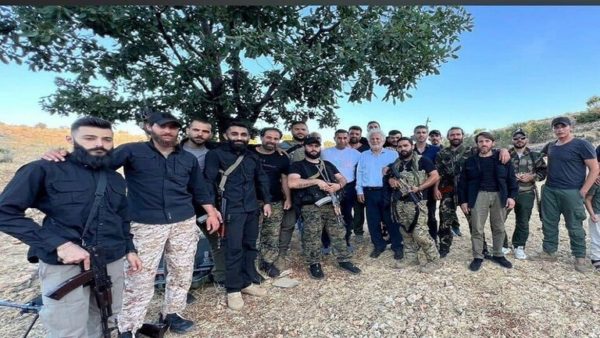 The Iraqi ambassador to Lebanon Haider Shiya’a Al-Barak in the middle of an armed group. Photo: Russia Today
Share:

Baghdad – The Iraqi ambassador to Lebanon, Haider Shiya’a Al-Barak appeared in the middle of an armed group during his visit to a Lebanese village, according to Russia Today news.

According to activists, Barrak visited a Lebanese village and appeared in the middle of an armed group, and fired an RPG7 rocket.

After photos of Barrak with the armed group went viral and stirred up controversy, Barrak issued an explanatory statement.

“I accepted the invitation of leaders of tribes in Bekaa governorate in eastern Lebanon, and firing a RPG7 rocket is one of their customs,” according to Barrak explanatory statement.

Firearm sales have risen in Lebanon threefold since the financial crisis began in 2019, even though the dollar value of the minimum wage has dropped to just 25 US dollar per month, according to The National.

People in Lebanon have been rushing to buy weapons on the black market in the past year as the struggling state fails to prevent rising crime and political violence, The National added.

This development comes after Al-Barrak was summoned in March 22 to Baghdad following media reports about hindering an Iraqi diplomat from making a statement to the press about ongoing bilateral talks during a recent official visit to Beirut.