Biden arrives in Israel, shakes hands with Netanyahu and Gantz despite COVID guidelines 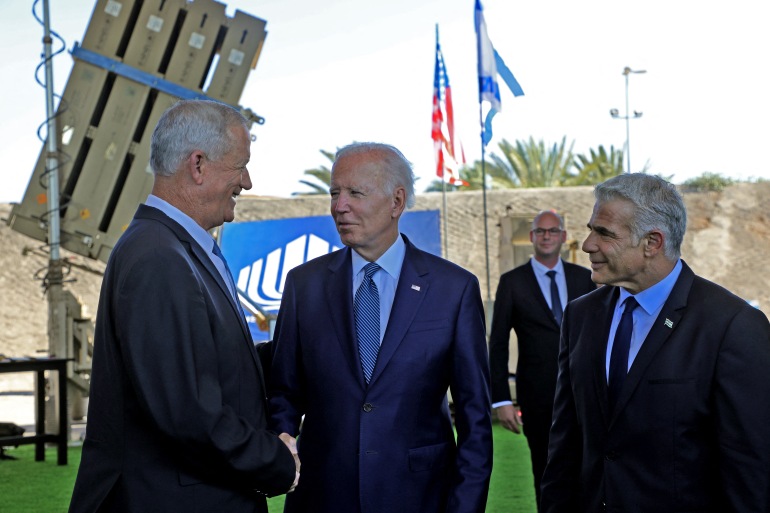 As Joe Biden starts his first visit to the Middle East as US president, the White House has signalled that he will avoid shaking hands with dignitaries and counterparts to decrease the risk of contracting COVID-19.

But the new guidelines, which come ahead of a highly anticipated meeting between Biden and Saudi Arabia’s Crown Prince Mohammed bin Salman, were not rigorously enforced upon the US president’s arrival in Israel on Wednesday; he shook the hands of Israeli officials.

“We’re in a phase of the pandemic now where we are seeking to reduce contact and to increase masking … to minimise spread,” US national security adviser Jake Sullivan told reporters on Air Force One.

White House spokesperson Karine Jean-Pierre echoed his comments. “We’re trying to minimise contact as much as possible,” she said.

The precautions, however, appear to have been short-lived in Israel. Biden fist-bumped Israel’s interim Prime Minister Yair Lapid and President Isaac Herzog after landing in Tel Aviv. But later in the day, footage showed him shaking hands with former Prime Minister Benjamin Netanyahu and Defence Minister Benny Gantz.

Later this week, Biden will fly to Saudi Arabia, where he is expected to meet regional leaders in the Red Sea city of Jeddah. The White House has confirmed that he will also meet with prince Mohammad bin Salman , who the US intelligence community accuses of ordering the killing of journalist Jamal Khashoggi at the Saudi consulate in Istanbul in 2018.

Riyadh insists that the killing of Khashoggi – who wrote for the Washington Post at the time of his death – was a rogue operation that took place without the approval or knowledge of top officials, including Crown Prince bin Salman, who is known by his initials, MBS.

As a candidate, Biden called Saudi Arabia a “pariah” over the killing, and early in his administration, he avoided dealing with MBS – the de facto leader of the kingdom. Instead, the White House has said that the president would engage with his counterpart, King Salman, the crown prince’s father.

It’s not clear whether Biden will follow his aides’ handshaking guidelines at the expected photo opportunity with MBS.

“The White House is desperately trying to avoid the picture of Biden shaking hands with the crown prince… COVID is a simple excuse but it won’t change the fact of the meeting,” Bruce Riedel, a foreign policy fellow at the Brookings Institution, told the Reuters news agency.

The Biden administration has said it will promote normalisation between Israel and Arab countries, including Saudi Arabia, during the president’s visit to the Middle East.

“We’ll continue to advance Israel’s integration into the region … Greater peace, greater stability, greater connection … It’s critical, I might add, for all the people of the region,” Biden said after landing in Israel on Wednesday.