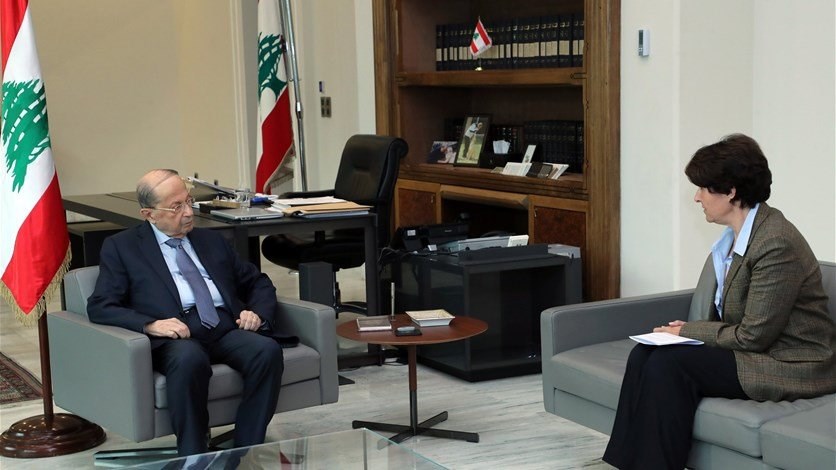 France’s ambassador to Lebanon Anne Grillo ( R) has urged President Michel Aoun ( L) to respect constitutional deadlines on the election of his replacement as the country struggles to avoid a crippling political stalemate.
Share:

BEIRUT: France’s ambassador to Lebanon has urged President Michel Aoun to respect constitutional deadlines on the election of his replacement as the country struggles to avoid a crippling political stalemate.

In talks with Aoun on Wednesday, Anne Grillo clarified the French position amid growing concerns of a possible presidential vacuum after Aoun’s term ends on Oct. 31.

She highlighted “the importance of speeding up parliament’s approval of the necessary laws to restore the economic and financial situation, in addition to following up on the Beirut port blast and fixing responsibilities.”

Lebanon faces a political deadlock in forming a new government until a new president is elected. Meanwhile, parliament is scheduled to start holding sessions to elect a president as of September.

Lebanon no longer a priority

Lebanon is no longer an international priority, according to Grillo who told al-Joumhouria newspaper that the world has changed since the start of the Russian war.

She said the next president must have the ability to restore the confidence of the international community in Lebanon and to make his country’s voice heard. “We are no longer hearing Lebanon’s voice in international conferences,” the French ambassador added.

Regarding the border demarcation negotiations, Grillo revealed that she had met twice with U.S. mediator Amos Hochstein. “I believe there is a real chance,” she said. “We have never been this close to reaching an agreement as we are today.”

The government is yet to be formed due to the campaigns launched by the Free Patriotic Movement headed by Aoun’s son-in-law Gebran Bassil against Prime Minister-designate Najib Mikati, despite the latter presenting to Aoun what he called a “full-featured” government formation.

Those close to the president said he rejected it because the Ministry of Energy was not given to a Christian FPM-affiliated figure. Instead, Mikati suggested a Sunni figure, not affiliated with the FPM, and kept the Ministry of Finance for the Shiite duo, Hezbollah and the Amal movement.

Bassil said: “Mikati does not want to form a new government and is looking for constitutional loopholes to keep his resigned caretaker government.”

There are growing rumors that the current FPM-affiliated ministers may withdraw from the caretaker government, ending its legitimacy, should Mikati decide to transfer the president’s powers to the premier in the event of a presidential vacuum.

However, constitutional expert Saeed Malek said that withdrawing from an already resigned government does not mean anything.

“The constitutional principle stipulated the continuity of this public facility. Shouldn’t ministers, in this case, remain in charge until a new government is formed or other ministers replace them?”

Malek said: “If these people unilaterally quit their job, they could be held accountable and prosecuted by parliament for the offense of not fulfilling their duties.”

In light of the political stalemate, state institutions are facing new strikes by public employees.

Georges Brax, a member of the gas station owners’ syndicate, said the fuel price table was not issued due to the strike staged by the General Directorate of Oil employees.

Fadi Abu Shakra, a representative of the union for fuel distributors and gas stations in Lebanon, said: “If the strike continues, the import of fuel ships will stop because import licenses will be suspended since public employees will not be doing their jobs. The situation is critical.”

Before the economic crisis in 2019, a judge’s salary in Lebanon was equivalent to about $5,000 (7.5 million Lebanese pounds.) But since the national currency’s depreciation, it became equivalent to $150. If judges were to be paid based on the 8,000 LBP/USD rate, they would make $937, which is far more than Lebanese university professors, high-ranking public employees and military officers are currently making.

Parliamentary Speaker Nabih Berri demanded on Wednesday all discriminatory measures against different public sector employees be stopped, claiming they will lead to collapses greater than the financial and economic slumps.

Public employees are demanding that their salaries, benefits, transportation allowances, and compensation be increased according to the prevailing conditions and inflation.

The heads of departments in the Directorate of Public Finance, in coordination with the Directorate of Treasury, the Directorate of Budget and Expenditure Control, and the Directorate of Administrative Affairs, joined the protest movement by announcing Wednesday that they are going on strike until the salaries of Ministry of Finance employees are increased based on the 8,000 LBP/USD rate, and their transportation allowances raised according to the new gas prices.

Member of the Development and Liberation bloc, MP Mohammed Khawaja, described the decision of the Banque du Liban governor regarding the judges’ salaries as bribery.

MP Halima Kaakour warned against adopting different exchange rates in different sectors, and stressed the need to modify the salaries of public employees within a comprehensive recovery plan that does justice to the employees and protects them from inflation.