US offers $10 mil. reward for Info on Hezbollah financier 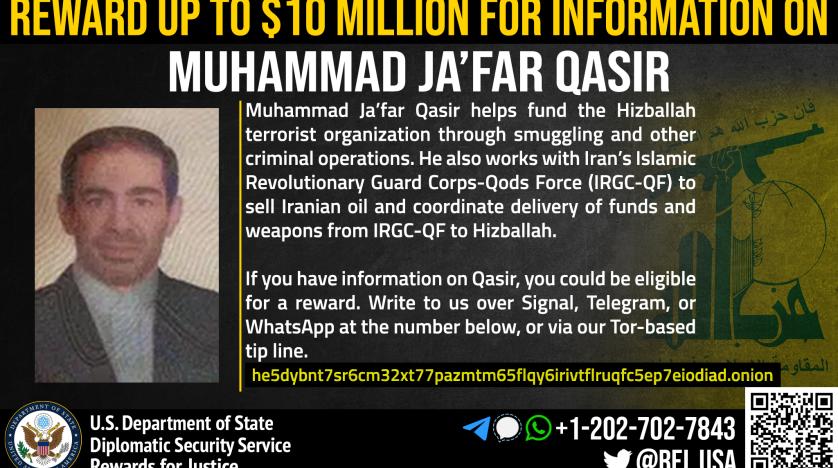 The United States offered a $10 million reward for anyone who provides information on Hezbollah financier Muhammad Ja’far Qasir.

It said that Qasir has close links to Syrian President Bashar Assad.

A photo of Qasir in a meeting with Assad and Iran’s former President Hassan Rouhani was made public.

The US Ministry of Foreign Affairs’ “Rewards for Justice” program, said the reward will be given in return for information about Qasir who “helps fund Hezbollah’s terrorist activities by selling Iranian oil, smuggling & other criminal ops.”

According to the US government, Qasir also helps oversee several front companies used to mask the IRGC-QF’s role in the sale of oil and other extractives, a crucial source of income for Hezbollah, the Quds (Quds) force, the regime of Syrian President Bashar al-Assad, and other illicit actors.

“In addition, Qasir leads Hezbollah’s Unit 108, which coordinates closely with the IRGC-QF to facilitate the transfer of weapons, technology, and other support from Syria to Lebanon,” the statement said.

Earlier in the week, the US government’s Rewards for Justice program offered up to $15 million for information that can disrupt Iran’s IRGC and its Quds Force financial networks. The Quds Force is a branch of the IRGC that conducts operations beyond Iran’s borders.

The announcement can be seen as additional pressure on the Islamic Republic as it continues to support militant groups across the Middle East and beyond, after negotiations to revive the 2015 nuclear agreement known as the JCPOA came to a halt in March.