Reformist MPs agreed to disagree on naming a PM , each MP to meet separately with Aoun 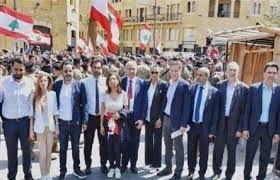 According to media reports the so called reformist MPS could not agree on the name of a potential PM , for this reason each MP will meet with president Michel Aoun separately during the binding parliamentary consultations next Thursday.

Lebanese daily al Akhbar which is closely linked to Hezbollah reported that the reformist MPs are holding continuous meetings in an attempt to select a name out of five candidates named before the consultations.

If the MPs manage to agree on one name, they will demand to meet the President as one bloc, the sources told the daily

According to analysts the only thing the reformists have agreed on so far is to disagree. The analysts believe that if the reformists were united prior to the elections they would have had the majority in the parliament , because the Lebanese people are sick and tired of the corrupt the ruling elite that destroyed and robbed the country.

But since they didn’t, the newly elected reform MPs have to look for friends whose believes closely match theirs so they can all form a bloc and start making a difference .

The people that voted for them have very expectations from the reformists , one analyst added

Asharq al-Awsat newspaper reported Thursday that Aoun is imposing certain conditions on the PM-designate. According to its sources Aoun is demanding that the next PM dismiss the Central Bank governor, include the administrative appointments on the new Cabinet agenda and recover the money transferred after the October 17 uprising by approving a forensic audit.

The daily said that, according to sources, Aoun has been delaying the binding parliamentary consultations in order to give time to FPM chief Gebran Bassil to find a a PM-designate other than Mikati.

It reportedly quoted Mikati as saying that he will not accept any conditions, and that the only way to save Lebanon is by approving a recovery plan, starting reforms and rehabilitating the energy sector in order to reach an agreement with the International Monetary Fund.

Meanwhile, Bassil has failed to convince his allies with a name for the PM post, the daily said, as the Shiite Duo leans towards re-naming Mikati.