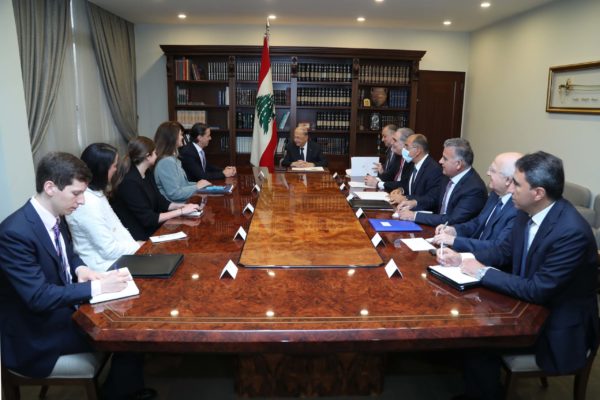 Visiting US mediator Amos Hochstein ( center left ) is shown during his meeting with Lebanese president Michel Aoun in the presence of several government officials
Share:

Lebanon Tuesday made a new offer to a visiting US mediator over a maritime border deal with Israel, holding back on demands for territory where Israel plans to imminently extract gas, an official said.

Beirut’s proposal however included a claim for all of a separate field that it had initially only sought part of, the official close to the negotiations said.

The new offer was made during meetings between Lebanon’s top leaders and US envoy Amos Hochstein, who landed in Beirut on Monday to relaunch indirect negotiations between Lebanon and Israel after a year-long pause.

Lebanese authorities last week had requested Hochstein visit after a gas production vessel arrived in Israel to launch extraction operations in the Karish offshore field, drawing condemnation from Lebanon, which had laid claim to parts of it.

But in meetings Tuesday with Hochstein, Lebanon’s top leaders pushed for the country’s maritime border to exclude Karish and include the whole of the nearby Qana field instead, the official close to the negotiations told AFP.

“We want the entire Qana field,” the official said on condition of anonymity because he was not authorised to speak on the issue.

Lebanon had initially demanded 860 square kilometres (330 square miles) of territory in the disputed maritime area, including part of Qana.

It then asked for an additional 1,430 square kilometres, also taking in part of Karish.

Hochstein will submit the new offer to Israel then relay its response to Lebanon.

Lebanon and Israel last fought a war in 2006, have no diplomatic relations and are separated by a UN-patrolled border.

They had resumed negotiations over their maritime frontier in 2020 but the process was stalled by Beirut’s claim that the map used by the United Nations in the talks needed modifying.

A quick settlement that would allow both Tel Aviv and Beirut to invest in their gas wealth , which requires great efforts on the part of the American mediator and quick acceptance by the Israeli side of the conditions set by the Lebanese side. This by far the best solution for all parties

Going to a military confrontation. No one can predict the results and repercussions it will leave, but it will certainly impede all gas investments in the Mediterranean, which is not in the interest of any of the parties involved nor in the interest of the region and specially Europe

Slow negotiations , which will be very harmful for Lebanon and Israel especially in light of the well-known position of all foreign oil and gas companies operating in the area , who refuse to take any risks associated with uncertainty , specially since such a scenario could lead to scenario two

For this reason , the Lebanese side should push for the first scenario and should avoid at any cost the third scenario specially since such a scenario could lead to scenario two which could have catastrophic repercussions for the region .