US envoy is optimistic over Lebanese position, vows to continue negotiations of maritime borders 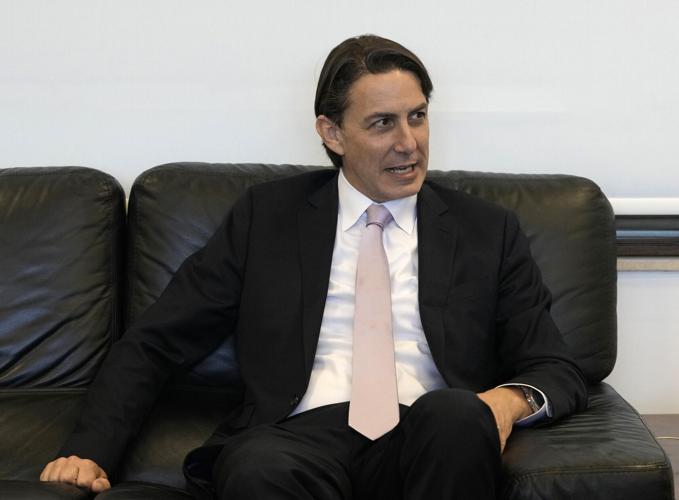 U.S. envoy mediating between Lebanon and Israel over their disputed maritime border. He sounded optimistic over the position that Lebanon took and vowed to continue the negotiations for a border deal
Share:

The U.S. envoy mediating between Lebanon and Israel over their disputed maritime border has met with Lebanese President Michel Aoun and discussed ways of reaching a solution amid rising tension along the tense border

BEIRUT (AP) — Lebanon’s president on Tuesday presented suggestions related to the disputed maritime border with Israel to the U.S. envoy mediating between the two countries, the president’s office said. The envoy said the suggestions “will enable the negotiations to go forward.”

President Michel Aoun’s office released the statement following his meeting with Amos Hochstein, a senior adviser for energy security at the U.S. State Department who has been mediating between the two neighbors.

Hochstein arrived in Beirut on Monday following an invitation by the Lebanese government and after Israel set up a gas rig at its designated location at the Karish field. Israel says the field is part of its U.N.-recognized exclusive economic zone, while Lebanon insists it is in a disputed area.

Hochstein’s discussions with top Lebanese officials focused on ways to reach a solution amid rising tensions as Lebanon’s Iran-backed militant Hezbollah group and Israel exchanged threats. Hezbollah’s leader last week warned he would strike the gas rig at Karish if drilling starts before an agreement is reached. The heavily armed Hezbollah, which has fought several wars with Israel, has repeatedly said in the past that it would use its weapons to protect Lebanon’s economic rights.

The U.S.-mediated indirect talks between Lebanon and Israel have been stalled since last year amid disagreements within Lebanon over how big the disputed area is.

The two countries, which have been officially at war since Israel’s creation in 1948, both claim some 860 square kilometers (330 square miles) of the Mediterranean Sea. Lebanon hopes to unleash offshore oil and gas production as it grapples with the worst economic crisis in its modern history.

Last year, the Lebanese delegation in the talks — a mix of army generals and professionals — offered a new map that pushes for an additional 1,430 square kilometers (550 square miles) as Lebanese territory.

In Beirut, Hochstein met with Aoun, Parliament Speaker Nabih Berri, caretaker Prime Minister Najib Mikati and other officials. He did not speak to reporters after the meetings.

Hochstein later told the U.S.-funded Alhurra TV station that the Lebanese government took “a very strong step forward” by presenting a more united approach. He refused to give details about the Lebanese suggestions, saying “it’s about looking at what kind of a compromise can be reached that the Israelis can agree to and not feel that it is being pushed into something against their interest while still preserving the most important part of Lebanon’s interest.”

“I think that it will enable the negotiations to go forward,” he said.