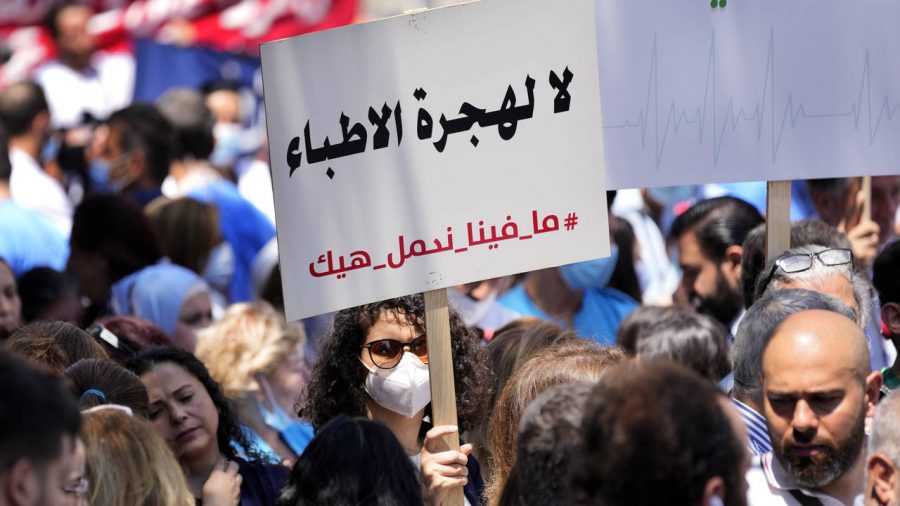 A medical worker holds an Arabic placard that reads: “No to doctors emigration, we cannot continue like this,” as she protests with doctors the deteriorating economic conditions, outside the Central Bank, in Beirut, Lebanon, Thursday, May 26, 2022. The syndicates of doctors in Beirut and the North as well as the Syndicate of Private Hospital Owners declared a two-day general strike Thursday and Friday. (AP Photo/Hussein Malla)
Share:

BEIRUT , Lebanon— Dozens of doctors, nurses and medical personnel rallied Thursday outside the Central Bank in the Lebanese capital of Beirut after declaring a two-day general strike to protest rapidly deteriorating economic conditions.

The strike was declared by two medical professionals’ unions — The Syndicates of Doctors in Beirut and the North and the Syndicate of Private Hospital Owners — which say they could no longer put up with Central Bank policies that have allowed banks to impose random capital controls and other restrictions.

During the strike, which ends Friday, only emergency cases and dialysis patients would be admitted to hospitals, the unions said.

Lebanon’s medical sector, which up until few years ago was among the best in the Middle East, is on the brink of collapse, barely surviving the country’s unprecedented economic and financial meltdown.

The crisis that started in October 2019 has seen the local currency lose more than 90% of its value to the dollar, wiping out salaries and savings. The hardship has led to the emigration of thousands of doctors and nurses and the closure of a large number of pharmacies, as well as severe shortages in medicines and medical equipment.

A number of hospitals have been warning they will have to close because they can no longer pay for their expenses or pay their employees’ salaries.

“Hospitals will close because there is no way they can continue. We have to pay cash when we have no access to cash,” said Suleiman Haroun, head of the private hospitals’ union, who joined the protest in Beirut along with a few hundred other colleagues.

He blamed Central Bank policies for destroying the sector.

Meanwhile, the Lebanese pound continued to hit new lows against the dollar, which was selling at around 35,600 pounds on the black market Wednesday. The Lebanese currency was pegged at 1,500 pounds to the dollar for 22 years until the crisis erupted in late 2019.