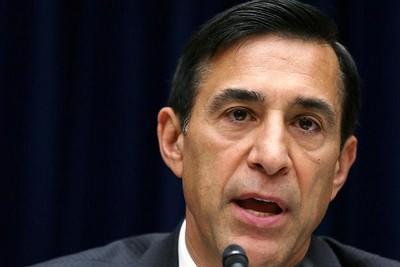 Darrel Issa an American businessman and politician who has served as the U.S. representative for California’s 50th congressional district . A member of the Republican Party, His father was the son of Lebanese Christian immigrants, and a member of the Maronite faith
Share:

The Biden administration ought to apply further sanctions on Iran as a means of curtailing the influence of its Hezbollah proxy in Lebanon, says Darrell Issa, a US congressman who is part of the American delegation at the World Economic Forum.

Despite generating little of its own revenues, Hezbollah has long enjoyed free rein in Lebanon thanks to Iranian largess, Issa says. He believes targeting Iran with further sanctions would undermine the militia’s control over Lebanese affairs.

“As much as I want to sanction Hezbollah, the group doesn’t generate much of their own money,” Issa, a California Republican of Lebanese decent , told Arab News on the fringes of WEF in Davos, Switzerland, on Wednesday.

“Their money is disproportionate because of Iranian influence. So, yes, while I do want more bank sanctions, those are ultimately irrelevant, unless we increase our sanctions on Iran.”

Issa was among a group of US congressmen who traveled to Lebanon on a fact-finding mission in November last year, later reporting back to President Joe Biden and Congress to propose ways to help the Lebanese.

Iran has a policy of arming and funding proxy militias in neighboring countries to further its own geopolitical agenda, often to the detriment of the security and well-being of local populations.

Although Lebanon’s May 15 parliamentary election returned a poor result for Hezbollah and its allies, Issa says history shows the need to follow through on the results and not to simply return to business as usual.

“If there’s a follow through, then there should be a new speaker and a new president free of unfair influence by Hezbollah,” Issa told Arab News.

“So far, the only thing we have are candidates who campaigned against corruption and who have achieved their goal of changing the majority, but they haven’t achieved the goal of ending corruption yet.”

Hezbollah, the only militia that did not disarm after Lebanon’s 1975-1990 civil war, lost its majority in the Lebanese parliament, with its bloc winning just 58 of the 128 seats on offer — 7 fewer than it needed.

The election of many anti-corruption independents has presented Lebanon with a rare opportunity to break free of the militia’s grip on public life and to carry out urgent reforms.

Since 2019, Lebanon has been in the throes of its worst ever financial crisis, which has been further compounded by the economic strain of the COVID-19 pandemic and the nation’s political paralysis.

These concurrent crises have sent hundreds of thousands of young Lebanese professionals abroad in search of security and opportunity, including many of the country’s top medical professionals and educators. For Issa, preventing this brain-drain ought to be a high priority for any incoming government.

“Lebanon can turn around very quickly, but only if those people are still in the country,” Issa said. “And today, the US is trying to help, but there’s a lot of exodus from Lebanon, and that is going to hurt the recovery.”