Lebanese vote shows demand for change. But enough to build on? 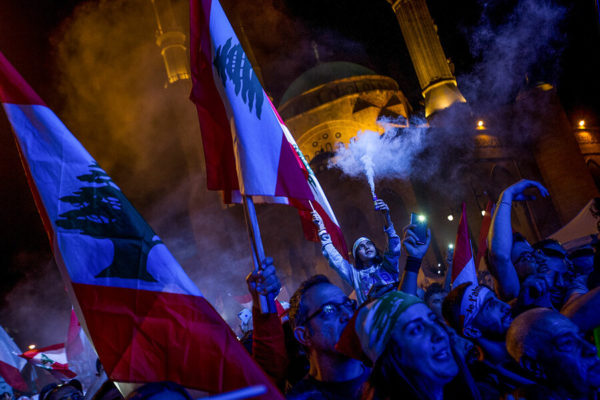 A girl holds up a smoking flare as thousands of Lebanese protesters rally against sectarian government and call for the removal of the country’s entire political class, in Martyrs’ Square on Nov. 3, 2019, in Beirut. Their demands for change have faded in the past two years, and reformist candidates won only 10% of the votes in May 15 parliamentary elections.
Share:

With a Lebanese flag draped over her shoulders, and optimism for political change filling her heart, Nisrine Hammoud joined hundreds of thousands of her fellow citizens on the streets during Lebanon’s “October Revolution” in 2019.

“We feel like we are alive again,” she told the Monitor late one night at Beirut’s Martyrs’ Square back then, as protesters demanded the toppling of a political class renowned for corruption, and a total uprooting of the entrenched sectarian system that was leading to state collapse.

That election finally came May 15, but with mixed results for activists like Ms. Hammoud. Pro-change candidates won a dozen or more of the 128 seats in Parliament, and Iran-backed Hezbollah and its allies lost their majority, dropping from 71 to 58 seats.

The result outstripped modest predictions for anti-establishment candidates, and so was lauded as a “breakthrough” by some Lebanese media. But it also showed the challenges of changing the country’s baked-in sectarian system at a time when people are worn down by the demands of survival.

Indeed, popular disgruntlement has grown even more widespread following the Beirut port explosion in August 2020, and the further disintegration of the economy and services that has now left more than 70% of Lebanese living below the poverty line.

The self-declared October Revolution and its street protests dissipated long ago, squelched by the COVID-19 pandemic, and then day-to-day preoccupations like coping with the lack of electricity, and chronic food and fuel shortages, activists say.

And yet, some 90% of those who voted last week still chose traditional sectarian parties, whose politicians – often political kingmakers for decades, who had emerged as warlords during Lebanon’s 1975-1990 civil war – have brought the nation to this state of collapse.

“The results are somehow shocking, because it’s not just about people who voted for the wrong people – a lot of people just didn’t vote,” says Ms. Hammoud, now in her mid-20s, about the low 49% turnout. “We needed people to actually take action. And that election was our only ticket … to vote for people who are really going to represent us.”

Though Lebanon’s chronic crises have caused deep despondency, analysts say, that did not translate into much support for change candidates, who were diverse and divided.

“They literally undermined each other, so anybody who wanted to vote for change … didn’t have an address to go to,” says Maha Yahya, director of the Carnegie Middle East Center in Beirut.

She notes that 11 separate lists of anti-establishment candidates competed against each other in the northern Sunni Muslim-majority city of Tripoli, one of Lebanon’s poorest. An analysis by the Lebanon Broadcasting Corporation International found that, had the opposition been unified nationwide, it likely would have doubled its seats in Parliament.

Still, the dozen or so seats that change candidates captured are nearly twice the number that many had predicted before election day.

“There is a shift and a change,” says Dr. Yahya. “Now, how profound, and whether this is the beginning of genuine change that we can build on. The question is, will we build on it?”

Lebanon has been ruled for decades under a formula that shares seats of political power among parties linked to different religious groups, and citizens tend to vote along religious lines. “Winding this back is going to take a long time,” she says.

“If you are scared that Hezbollah is going to attack you, you run and vote for [Christian] Lebanese Forces, because you think they are the ones who will be able to stand up” and protect you, Dr. Yahya explains. “You are not going to overhaul a system like the Lebanese one overnight.”

The chief elections observer for the European Union, György Hölvényi, said the elections were “overshadowed by widespread practices of vote-buying and clientelism, which distorted the level playing field.” Observers from the Lebanese Association for Democratic Elections recorded 3,600 “flagrant violations” on election day, and said partisans of the two main Shiite parties, Hezbollah and Amal, attacked their observers.

The impact of the vote will become clearer in the coming months. Parliament will first choose a new speaker – almost certain to be Amal leader Nabih Berri, who has held the post for 30 years already. Then it will face the much harder task of electing a government, whose top priority will be laws and changes required to comply with International Monetary Fund conditions for massive bailout funds.

“That means you really want to have a seat at the table – the stakes are much higher,” says Heiko Wimmen, a political analyst with the International Crisis Group in Beirut. Finding a win-win formula for all will be “extremely difficult,” he predicts.

On paper, the new cadre of change MPs “potentially could be kingmakers, but that would require a cohesive parliamentary bloc” and a common platform, which seems a distant prospect, Mr. Wimmen says.

He notes that an assumption made throughout Lebanon’s multiple crises has proved wrong. Many observers had believed that the situation for average Lebanese citizens would become so dire that the political elite would be compelled to change its behavior or risk a popular uprising.

In fact, politicians flaunt their wealth and power as brazenly as ever, and as people have grown more desperate and despondent, they “are less able to organize any kind of resistance,” Mr. Wimmen says.

And they are exhausted, Ms. Hammoud points out.

“People have been so distracted by other things, like getting food on the table,” she says. “For the past two years we have just been struggling to fill up our cars with gas, to be able to buy bread. We stood in queues for hours just to get things done, and now we have this electricity problem, and the Lebanese lira keeps devaluing against the dollar.”

Lebanon’s ruling warlord-politicians “stole our money, they stole our parents’ pension funds, and we have no electricity because of them; we have [nothing] because of them,” says Ms. Hammoud. Just keeping that reality in mind, she adds, “is always our motivation, because that’s the only way you can wake people up.”

Ms. Hammoud says that the anti-establishment candidates’ showing in last week’s elections feels to her like a pale reflection of the popular demand for change she felt on the street in 2019.

She knows she is in a minority, but she is not giving up.

Lebanon’s ruling warlord-politicians “stole our money, they stole our parents’ pension funds, and we have no electricity because of them; we have [nothing] because of them,” says Ms. Hammoud. Just keeping that reality in mind, she adds, “is always our motivation, because that’s the only way you can wake people up.”