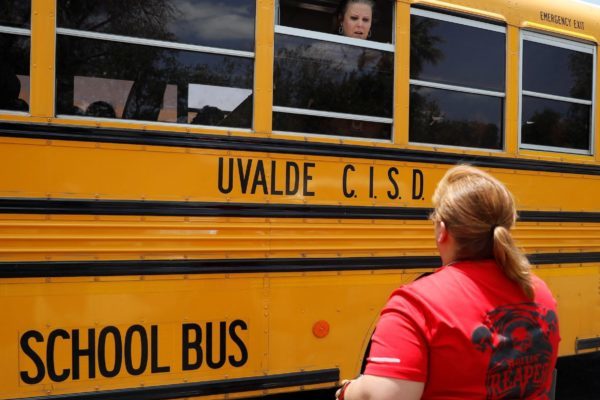 File photo of an Uvalde school bus. Just 72 hours after at least 14 children and a teacher were shot to death at an elementary school in Uvalde, Texas, a number of Republican lawmakers are set to address a National Rifle Association meeting in Houston, including former President Donald Trump and Texas Governor Greg Abbott.
Share:

Just 72 hours after at least 14 children and a teacher were shot to death at an elementary school in Uvalde, Texas, a number of Republican lawmakers are set to address a National Rifle Association meeting in Houston, including former President Donald Trump and Texas Governor Greg Abbott.

The NRA has long opposed efforts to restrict access to guns. In 2011, it sued Texas in a failed effort to force the state to lower the legal age for possessing a handgun from 21 to 18.

Law enforcement said the suspected shooter killed 15 people at Robb Elementary School and used a handgun and possibly a rifle.

The NRA meeting, hosted by the group’s Institute for Legislative Action – its self-described “lobbying” arm – is scheduled to begin Friday. It is open only to NRA members and runs through the weekend.

Texas Sen. John Cornyn had been scheduled to speak but, in a statement, a spokesperson claimed he had already withdrawn prior to the shooting due to an “unexpected change in his schedule.”

In the 2020 election cycle, the NRA directly contributed more than $616,000 to federal politic ans, according to OpenSecrets, a nonprofit monitoring group. Of the recipients, more than 98% were Republicans.

Earlier this year, the group endorsed Abbott’s campaign for reelection.

“Governor Abbott is a tireless defender of the right to keep and bear arms,” NRA CEO Wayne LaPierre said, the Houston Chronic reported.

Neither Abbott, Cruz, nor Crenshaw responded to Insider’s request for comment on whether they still plan to attend the event.

Two days before the start of summer break, an 18-year-old man opened fire at an elementary school in Uvalde, Texas, on Tuesday, killing 14 students and one teacher, Gov. Greg Abbott said.

Uvalde Consolidated Independent School District police Chief Pete Arredondo said there also were multiple injuries from a “mass casualty incident” at Robb Elementary in Uvalde. The gunman is believed to have acted alone and is dead, he said.Arredondo declined to provide further details or take questions.The suspected shooter is from Uvalde, Abbott said. He was identified as Salvador Ramos, according to officials.

“It’s believed that he abandoned his vehicle and entered into the Robb Elementary School in Uvalde with a handgun and he may have also had a rifle, but that is not yet confirmed according to my most recent report. He shot and killed, horrifically, incomprehensively, fourteen students and killed a teacher,” he said.The setting of an elementary school called to mind the Sandy Hook shooting in Connecticut in 2012 that left 26 people dead, including 20 children between 6 and 7 years old.

Uvalde Memorial Hospital spokesperson Tom Nordwick earlier said that two people died in the school shooting and that 13 children and a man in his 40s were being treated for injuries.University Hospital in San Antonio said in a tweet that they received a child and an adult from the school shooting. The adult, a 66-year-old woman, is in critical condition, the hospital said in a tweet. A call went out for help for an active shooter situation, according to a law enforcement official.US Customs and Border Protection, which is the largest law enforcement agency in the area, assisted with the response. A CBP agent was shot in the head. His injuries are non-life-threatening, according to the official. The governor said two law enforcement officers were hit by bullets, but didn’t have serious injuries.

Videos taken by a bystander, Isaias Melendez, show scores of armed officers at the scene while others flee the school.The FBI and the Bureau of Alcohol, Tobacco, Firearms and Explosives (ATF) are assisting local police with the investigation.President Joe Biden has ordered US flags on federal grounds to be flown at half staff until sunset on Saturday to honor the victims of this “senseless acts of violence.” The President addressed the nation Tuesday night at 8:15 p.m. ET.

30th shooting at a K-12 school this year

This marks at least the 30th shooting at a K-12 school in 2022. Excluding Tuesday’s shooting, so far in 2022 there have been at least 38 shootings in K-12 schools, colleges and universities, resulting in at least 10 deaths and 51 injuries.

The Texas shooting is the deadliest US school shooting since the Marjory Stoneman Douglas High School shooting in Parkland, Florida, in February 2018, when 17 people were killed.Robb Elementary teaches second through fourth grades and had 535 students in the 2020-21 school year, according to state data. About 90% of students are Hispanic and about 81% are economically disadvantaged, the data shows. Thursday was set to be the last day of school before the summer break.The school district said it is canceling all school activities following the shooting.Uvalde County, located about 85 miles west of San Antonio, had a population of about 25,000 as of the 2020 Census.

Here is an update:

The suspected Texas school shooter is believed to have shot his grandmother before going to the school, three law enforcement sources told CNN. State Sen. Roland Gutierrez said the woman was airlifted to San Antonio and “is still holding on,” citing information he was given by the Texas Rangers.