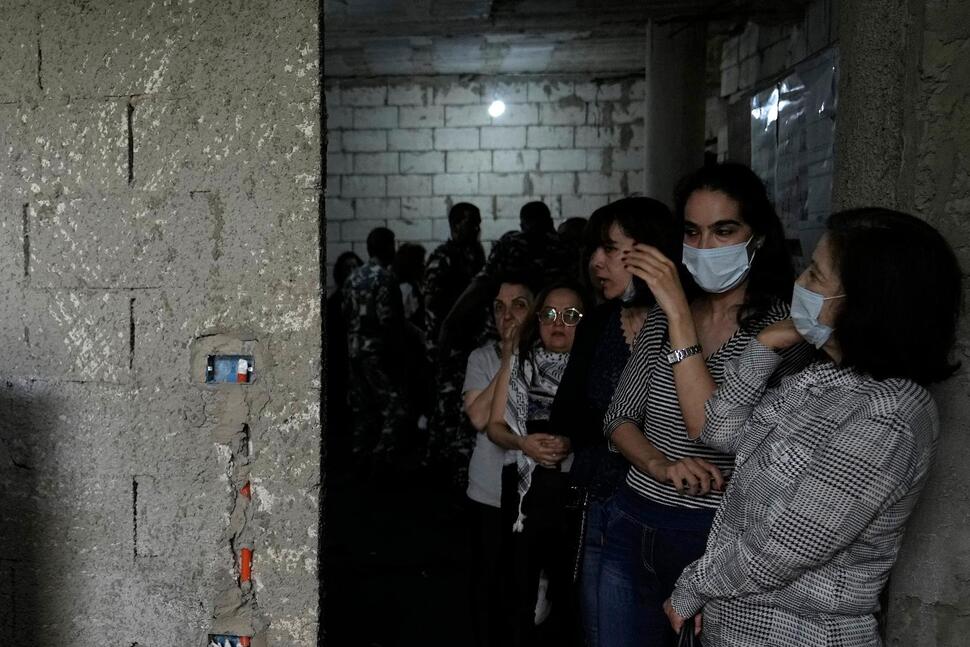 Lebanese women line up to vote in the Druze stronghold of Mount Lebanon town of Aley east of Beirut, Lebanon, Sunday, May 15, 2022. Lebanese voted for a new parliament Sunday against the backdrop of an economic meltdown that is transforming the country and low expectations that the election would significantly alter the political landscape. (AP Photo/Hassan Ammar) THE ASSOCIATED PRESS
Share:

Lebanese voted for a new parliament against the backdrop of an economic meltdown that is transforming the country amid low expectations that the voting would significantly alter the political landscape.

By BASSEM MROUE and ZEINA KARAM,

BEIRUT (AP) — When Lebanon’s economic collapse accelerated six months ago, Abdul-Hamid Yamout lost his job at Beirut’s international airport — and with it all sense of security.

Since then, he’s struggled to provide for his family, worrying constantly about the future of his two children. On Sunday, he planned to use the ballot box to punish the ruling class by voting for a list of independents.

“I will give them my vote because they want change,” he said, recalling his participation in nationwide protests against government corruption in 2019.

Yamout, 39, who now sews curtains in order to survive, was among those voting for a new parliament Sunday, hoping to unseat the entrenched politicians they blame for the crisis.

A new crop of candidates from the protest movement are running against them, hoping to at least score a breakthrough by picking up a few seats. But they are divided and lack the money, experience and other advantages held by traditional political rulers.

The vote is taking place against the backdrop of an economic meltdown that is rapidly transforming the country, triggering the biggest wave of emigration since its 15-year civil war ended in 1990.

“There are no jobs, they blew us up at the port, I can’t find baby formula for my children and cannot treat my elderly parents,” Yamout cried, in reference to a massive explosion at the Beirut port in August 2020 that levelled the city.

It is also the first election since the port explosion that killed more than 200 people, injured thousands and destroyed parts of Lebanon’s capital. The blast, widely blamed on negligence, was set off by hundreds of tons of poorly stored ammonium nitrate that ignited in a port warehouse.

For many, it is seen as a chance to punish the current crop of politicians, most of whom derive their power from Lebanon’s sectarian political system and spoils taken at the end of its 15-year civil war in 1990. But expectations were low that it would significantly alter the political landscape, amid widespread resignation that the system was rigged to bring back the same powerful political parties.

Turnout appeared to be low by early afternoon, at around 27 percent.

The election, the first since 2018, is also being closely watched to see whether the heavily armed, Iran-backed Hezbollah and its allies can preserve their parliamentary majority amid rising poverty and hardship.

“I did what I can do, and I know the situation will not change 180 degrees,” said Rabah Abbas, 74, after casting his ballot in Beirut. He fears the vote is only symbolic and that Lebanon will be stuck again in post-election political bickering over the formation of a new government and electing a new president in October.

The extent of Lebanon’s collapse was on full display Sunday. In the northern city of Tripoli, Lebanon’s most impoverished, several polling stations were without electricity as voters, including the elderly, had to climb several flights of stairs to cast their ballots. Voters and election workers were seen using the light from their mobile phones to check names and lists during the balloting.

Mainstream political parties and politicians remained strong going into the vote, while opposition figures and civil society activists hoping to unseat them are fractured and numerous, creating a confusing electoral landscape for voters.

Yamout said he was offered three million Lebanese pounds (around $110) by one of the political parties in return for his vote, an offer that he says he categorically rejected, saying: “I voted for them in the past and it was a big mistake.”

Since the meltdown began, tens of thousands of people like Yamout have lost their jobs, the Lebanese pound has shed more than 90% of its value and many people have left to seek opportunities abroad. Three quarters of the country’s 6 million people, including 1 million Syrian refugees, now live in poverty.

The World Bank has described Lebanon’s collapse as one of the world’s worst in the past 150 years. A U.N. official who was on a visit to Lebanon this week described it as a ‘’failing state’’ and blamed politicians.

Some 718 candidates on 103 lists are running for seats in the 128-member parliament, which is equally divided between Muslims and Christians according to Lebanon’s power-sharing system. The vote is held once every four years. In 2018, voters gave the powerful Hezbollah and its allies the majority with 71 seats.

Lebanon has more than 3.5 million eligible voters, many of whom will cast their ballots in its 15 electoral districts.

Reflecting the tensions, fist fights broke out between Hezbollah supporters and those of the Saudi-backed Christian Lebanese Forces party, which has been among the most vocal critic of the Iran-armed group. The Lebanese Association for Democratic Elections, LADE, said its delegates were forced to withdraw from two polling stations following threats by Hezbollah supporters and their allies of the Shiite Amal group.

The vote this year comes as the main Sunni political leader, former Prime Minister Saad Hariri, suspended his work in politics and called for a Sunni boycott. Hezbollah and its allies were looking to exploit that vacuum.

In a sign of how ideology and political allegiances often take precedent in Lebanon, Qassim Shtouni, 71, drove all the way from his village in southern Lebanon to Beirut to vote. He said he chose an alliance consisting of several mainstream groups including Hezbollah, President Michel Aoun’s Free Patriotic Movement and the Amal group of Parliament Speaker Nabih Berri.

Sitting on a plastic chair outside a polling station, Shtouni said the main reason he voted for a Hezbollah-led alliance is “because my vote will be against normalization with Israel.” He noted recent agreements between Israel and Gulf Arab countries.

“The elections in Lebanon today are not local elections. They are international elections,” he said, referring to the political battle between Iran-backed groups and pro-West factions.

After the election results are out, the government of Prime Minister Najib Mikati will become a caretaker Cabinet until the president calls for consultations with the new parliament members, who will choose the next premier.

The new parliament will also elect a new head of state after President Michel Aoun’s six-year term expires at the end of October.