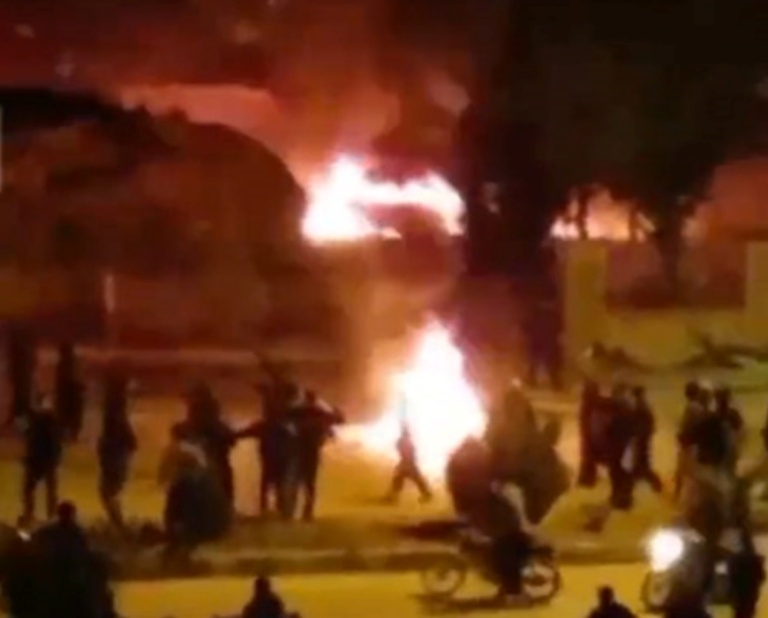 Protests began in some Iranian cities last week sparked by the government’s subsidy cut decision that caused price hikes in Iran by as much as 300% for a variety of flour-based staples.
Share:

UBAI (Reuters) – Spreading protests across Iran over a cut in state subsidies on food have turned political with slogans calling for top leaders to step down, according to posts on social media, and unconfirmed reports said at least four protesters were killed.

Protests began in some cities last week sparked by the government’s subsidy cut decision that caused price hikes in Iran by as much as 300% for a variety of flour-based staples.

The government also raised prices of some basic goods such as cooking oil and dairy products in Iran, where almost half of its 85 million population is under poverty line, according to official figures.

Now protesters have expanded their demands, calling for more political freedom, an end to the Islamic Republic and the downfall of its leaders, according to witnesses and social media posts.

Footage on Twitter showed protests in dozens of provinces such as Ardabil, Khuzestan, Lorestan and Razavi Khorasan. Some state-affiliated media, meanwhile, said calm had been restored in the country.

However, Protests continued on early Sunday in at least 40 cities and towns across Iran, including in the town of Quchan near the Turkmen border, the northern city of Rasht and the western city of Hamedan, according to videos posted on social media.

Reuters could not independently confirm authenticity of social media posts and videos. Iran’s state news agency IRNA said on Friday that some shops were “set on fire in some cities”, prompting police to arrest scores of “provocateurs”.

The semi-official ILNA news agency on Saturday, citing a lawmaker, said one protester was killed in Dezful, a city in the oil producing southwestern province of Khuzestan. But videos on Twitter showed at least four demonstrators were killed by security forces.

Residents of the capital, contacted by Reuters on Sunday, reported a heavy presence of security forces across Tehran.

Global internet monitor NetBlocks on Saturday reported a disruption lasting hours in Iran amid protests, a potential move by the authorities to prevent protesters from communicating with each other and sharing video on social media.

The latest unrest adds to mounting pressure on Iran’s rulers, who are struggling to keep the crippled economy afloat under U.S. sanctions, reimposed since 2018 when Washington ditched Tehran’s 2015 nuclear deal with major powers. Talks to revive the pact have stalled since March.

Fearing a revival of protests in recent years that seemed to shed light on the establishment’s vulnerability to popular anger over the economy, the government has described its decision as “fair redistribution” of subsidies to lower-income people.

In 2019, what began as scattered protests over a surprise increase in fuel prices, quickly spread into one of the biggest challenges to Iran’s rulers, sparking the bloodiest crackdown in the 40-year history of the Islamic Republic.

The reported death toll in 2019 has varied between a Reuters account of 1,500 dead and an Amnesty International figure of more than 300. Both have been dismissed by Iranian authorities.