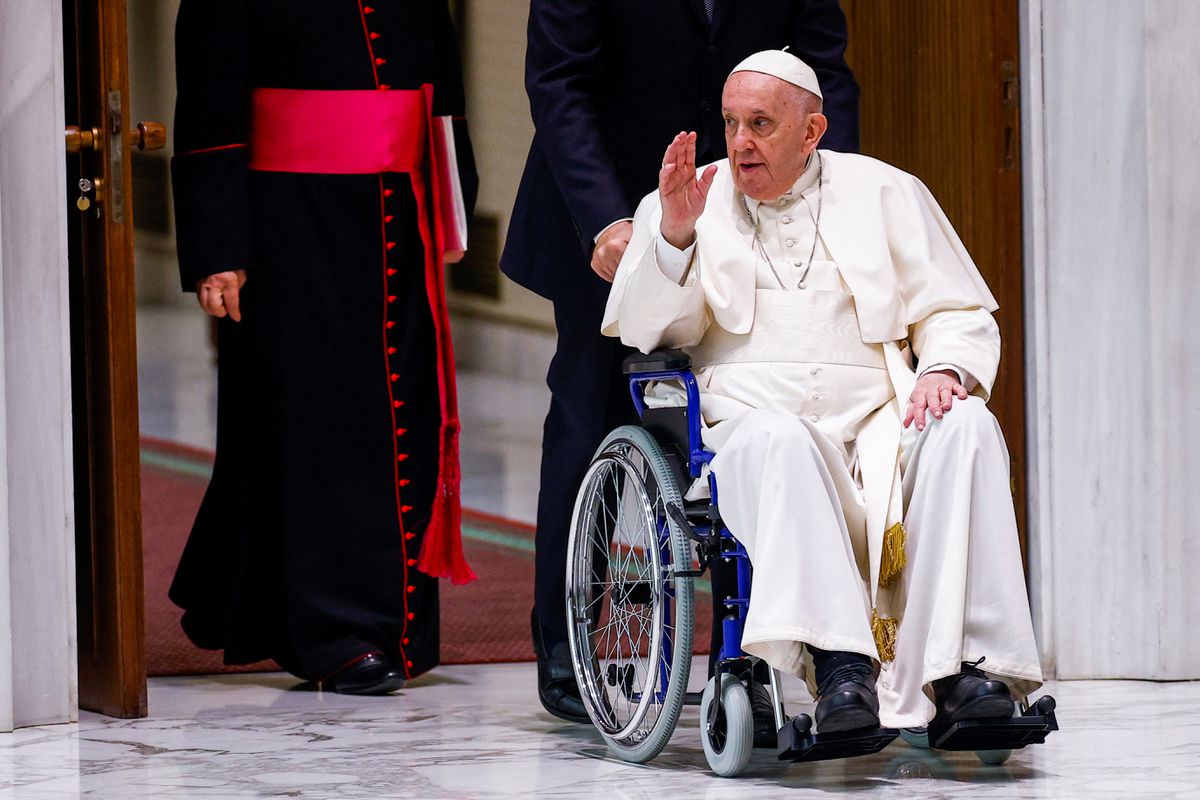 Pope Francis arrives on a wheelchair to meet with participants in the plenary assembly of the International Union of Superiors General (IUSG) at the Vatican, May 5, 2022. REUTERS/Guglielmo Mangiapane
Share:

Nassar did not elaborate on the “health reasons” behind the postponement, but the pope who has suffered from pain in his knee was seen using a wheelchair for the first time at a public event Thursday.

“Lebanon received a letter from the Vatican officially informing it of the decision to postpone the scheduled visit of the Pope to Lebanon,” Nassar said in a statement published by the official National News Agency.

The pope’s “foreign visits and scheduled appointments… have been postponed for health reasons,” said Nassar, who heads a committee tasked with preparing for the trip.

The Vatican’s press office confirmed the trip would not take place as planned, without providing a reason.

It is still the pope’s “firm intention” to visit Lebanon at a later date, the office added.

The Vatican had never confirmed the visit but the Lebanese presidency in April said the 85-year-old pontiff would visit Lebanon in June.

A Vatican source told AFP the pontiff’s trip to the Democratic Republic of Congo and South Sudan in July would still go ahead.

Francis has been suffering for months with pain in his right knee that forced him to cancel numerous engagements and from presiding over some religious celebrations.

The Vatican has not said officially what the problem is, although sources have told AFP he has chronic arthritis.

The pope himself has also spoken of an injured ligament in his knee.

He told Italian daily Corriere della Sera in an interview published last week that he would undergo an “intervention with infiltration”.

And in April, the pontiff told a newspaper in Argentina that he was treating his knee pain by putting ice on it and taking some painkillers.

His visit to Lebanon, following its May 15 parliamentary elections, would have been the third by a pope to the country since the end of the 1975-1990 civil war.

Pope Benedict XVI visited in 2012, to appeal for peace months after the start of the civil war in neighbouring Syria, while Pope John Paul II came in 1997.

Lebanon, home to one of the largest Christian communities in the Middle East, has been gripped by an unprecedented economic downturn since 2019, with more than 80 percent of the population now living in poverty.

Francis, who has received Lebanon’s president and prime minister in the Vatican in recent months, had previously promised to visit the country and repeatedly expressed concern over its worsening crises.