L .F. blasts Bassil, brands him as ‘thief of the republic’ 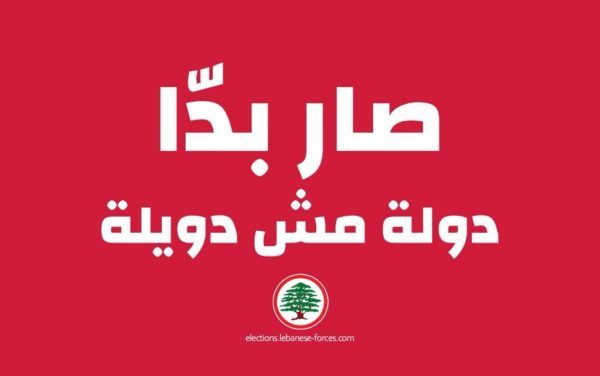 A Lebanese Forces 2022 election campaign poster that reads: It is time to have a state and not a mini state
Share:

The Lebanese Forces on Monday hit back at Free Patriotic Movement chief Jebran Bassil over the issue of electoral spending, blasting him as the “thief of the republic.”

“The thief of the republic and the looter of the people who is to blame for at least $40 billion in electricity deficit over the period of 10 years… lacks a lot of ethics, and this is agreed on by the majority of the Lebanese,” the LF said in a statement.

It also reminded Bassil that he is on “an international sanctions list,” in reference to the U.S. sanctions slapped on him over corruption-related allegations.

“Anyhow, the most important electoral supervisory commission is the people, who will say their word on May 6, 8 and 15, so be very prepared,” the LF added.

Bassil has on Sunday filed a complaint against the LF and the Kataeb Party, accusing them of exceeding the allowed limit of electoral spending in a “blatant and extreme manner.”

When Bassil took over the ministry of energy he promised 24 hour 7 days a week electricity .

After $4O billion in subsidies , Lebanon barely gets 2 hours of electricity per day from the government owned EDL

While the October 2019 demonstrators have called for the fall of the entire government, Bassil emerged as the target of a popular profane chant and was seen by many as the embodiment of the political establishment.

“For the revolution, public enemy number one is Bassil, as he is the face of corruption and his antagonistic and condescending attitude has alienated and ostracized the majority of the Lebanese,” explained Makram Rabah, a lecturer at AUB.