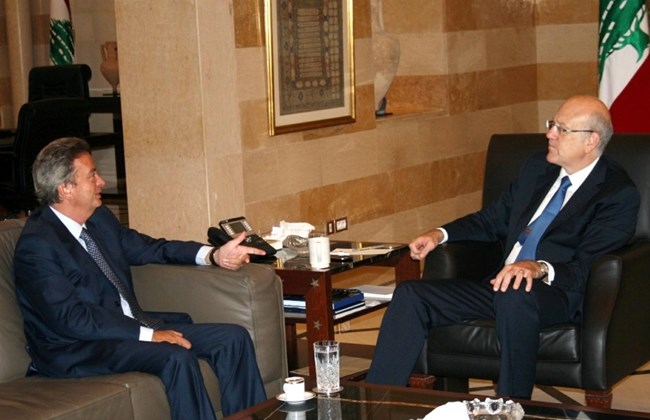 File photo of Lebanon Central Bank Governor Riad Salameh L taken when he handed PM Mikati a report on his personal accounts prepared by his own auditors . Salameh and his brother Raja reportedly have hundreds of millions of US dollars in several accounts in Europe and own hundreds of real estate properties in several European countries specially UK and France
Share:

Prime Minister Najib Mikati claimed on Wednesday that the government is keen on preserving the depositors’ rights, especially small depositors as per the government’s plan that was presented during the session held on the fourteenth of April 2022.

Mikati also added that the draft law, that aims to establish exceptional and temporary restrictions on bank transfers and cash withdrawals, and through this description, it is not related to the rights of depositors, but rather constitutes a platform required by the International Monetary Fund in order to present the desired recovery plan on its board of directors.

Mikati called on “all those concerned to approach this issue objectively, away from outbursts and populism, in order to reach a fair and just solution for all.”

His comments come after depositors and activists rallied Wednesday outside Parliament to prevent MPs from attending a session on capital control held by the joint parliamentary committees.

The depositors syndicate and the Mouttahidoun lawyers union considered in a joint statement that the capital control will deprive depositors from their rights, describing it as a “disguised amnesty” and a “dangerously flawed” law.

Some MPs also considered that the law needs amendments to protect the depositors’ rights.

The joint parliamentary committees are studying the capital control draft law before referring it to Parliament’s general assembly.

A session, last week, ended without an approval as amendments protecting the rights of depositors had been introduced.

The adoption of a capital control law is one of the reforms requested by the International Monetary Fund to financially help crisis-hit Lebanon.

“Solutions should not be at depositors’ expense” : Daryan

Lebsnon’s Grand Mufti of the Republic Sheikh Abdul Latif Daryan on Wednesday called for “preserving people’s deposits and savings,” stressing that “the solutions for the financial and economic crisis should not be at the expense of depositors and their lifelong savings.”

The solutions “should be at the expense of those who plunged the country into the current deterioration at all levels,” the Mufti added.

“We will not accept that citizens be the victims of any measures taken by the state and its institutions, seeing as the people’s plight is huge,” Daryan went on to say.

“We must stand by them and support them, because the country cannot be built at the expense of impoverishing its people,” the Mufti added.

The session on capital control was adjourned Wednesday, as the Lebanese Forces and Free Patriotic Movement’s MPs refused to discuss the draft law.

Depositors and activists had rallied since morning outside Parliament to prevent MPs from attending the session held by the joint parliamentary committees, as they considered that the law will deprive depositors from their rights.

The LF and FPM’s MPs said they need to look into the recovery plan before discussing the capital control draft law.

One analyst told Ya Libnan” PM Mikati is promising the depositors something he can’t deliver . He was referring to a draft of the plan that was submitted to the IMF to plug a huge hole in the financial system. The draft forsees returning just $25 billion out of a total $104 billion in hard currency deposits to savers in U.S. dollars. ”

Many of the corrupt Lebanese politicians and several top officials and bank executives were able to transfer billions off US dollars to their overseas accounts with the help of Central bank chief, the analyst stressed