Macron accuses Le Pen of being on Putin’s payroll 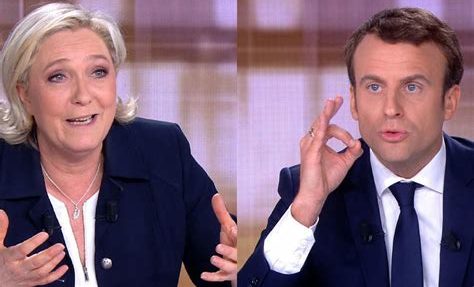 President Emmanuel Macron R accused the right leader Marine Le Pen of effectively being on the Kremlin’s payroll. She admitted taking a loan from a Russian bank close to the Kremlin because French banks would lend her the money she needed . Macron stressed that Le pen is incapable of “defending French interests” because she is so dependent on Russia president Putin
Share:

PARIS — President Emmanuel Macron made an unprecedentedly direct attack on far-right leader Marine Le Pen on Wednesday by using a key TV debate ahead of Sunday’s election to accuse her of effectively being on the Kremlin’s payroll.

Macron’s accusations on support from Russia were a moment of peak tension in a two-and-a-half hour televised debate that set the two candidates sparring on a range of subjects including the EU, pensions and energy.

The French president accused the head of the National Rally party of being “dependent on Vladimir Putin” and incapable of “defending French interests” owing to party loans taken with a Russian bank close to the Kremlin.

Despite Macron’s no-holds-barred attack on Russia, Le Pen performed better on Wednesday than during a similar TV debate against Macron at the same stage of the campaign in 2017, when she faltered through the debate mixing up her arguments and fumbling her notes. In all, neither party seemed to land a knock-out blow.

On the war in Ukraine, Macron put Le Pen on the back foot early on in the debate. “You depend on Russia and you depend on Mr. Putin,” the president said, in reference to a loan that Le Pen’s party obtained with a Czech-Russian bank “close to the Russian leadership.”

“When you speak to Russia, you are not speaking to any foreign leader, you are talking to your banker,” he stressed. This is not the first time Macron has attacked his opponent on Russia, referring to her alleged complacency, but he has rarely slammed her with such directness.

Le Pen’s ties to Russia have been a thorn in the flank of her campaign despite the fact that she has condemned the Russian invasion of Ukraine and has tried to distance herself from past pro-Putin statements. During the debate, Le Pen made a point of expressing her “absolute solidarity and compassion” with Ukraine and slammed the Russian aggression as “not admissible.”

Macron scented blood at this stage, accusing her of changing her tune because of recent events, contrary to her party’s “historical positions” on Russia. The president went as far as to draw a link between Le Pen’s refusal to condemn the annexation of Crimea in 2014 and her success in obtaining a Russian loan in 2015.

“As soon as there are important and courageous decisions that need to be made, neither you nor your leaders are there…. You cannot defend the interests of France because your interests are linked to Russia,” he said, adding references to her party’s refusal to back a round of sanctions against Russia in the EU parliament.

Visibly boxed into a corner, the far-right leader responded she was “an absolutely and totally free woman” and that she was forced to seek a foreign loan because no French bank would lend to her. The far-right leader tried to turn the tables on Macron, accusing him of having courted the Russian leader inviting him to France during his mandate, but with little success. “I invited a foreign leader, not my banker,” he retorted.

Brussels’ trade policy emerged as an intense bone of contention during the debate, even though both candidates agreed on the risks of allowing European markets to be too open to foreign imports.

When Le Pen accused Macron of embodying the EU’s free trade model, the incumbent had to tread a difficult line between defending the merits of the free market and reassuring France’s farmers and French public opinion more broadly.

The right-wing candidate resorted to the classic anti-trade repertoire — warning against “Brazilian chickens” and “Canadian beef” — and attacked Macron for not protecting French farmers and consumers against food products flooding in from outside. In response, Macron sought to portray himself as a chief opponent to a trade deal between the EU and South America’s Mercosur countries over environmental concerns.

Seizing on the spirit of the age, Le Pen gave an environmental twist to her crusade against free trade, which used to be mainly based on economic patriotism.

“I think that the economic model based on free trade — which consists in producing 10,000 km away to consume 10,000 km further — is killing the planet,” Le Pen said, noting that trade is “responsible for the majority of greenhouse gas emissions.” That’s why, she explained, she “built [her] entire project around localism … to consume as nearby as possible.”

With France currently holding the rotating presidency of the Council of the EU, Macron’s government has pushed to halt imports of products that are not produced under the same strict standards as in the EU and has put negotiations on new trade deals on hold, raising concerns among more liberal EU countries. Le Pen’s program goes further as she wants to exclude all agri-food products from trade agreements.

Pensions by the numbers

Le Pen and Macron traded barbs over pensions reform, with Macron defending his unpopular decision to push back the age of retirement and Le Pen trying to portray herself as the defender of the French worker.

In France, all workers receive a state pension at the end of their working lives, which means that setting an age of retirement has a huge impact on state finances. Macron wants to push the legal age of retirement back to 64 or 65 years old if re-elected. Le Pen wants to keep it between 60 and 62 years old.

My project is clearly different from Mr Macron’s project, who wants to get everyone working until 65 years old,” she said. “It’s an absolutely unbearable injustice.”

With a more generous pensions system, the far-right leader is trying to attract blue-collar voters, many of whom start their careers young and work in difficult professions. The age of retirement is a cornerstone of Le Pen’s campaign platform, which focuses on welfare issues and cost of living instead of her usual themes of immigration and security. The National Rally also hopes they will attract far-left voters, for whom pensions is an important issue.

Pensions are a thorny subject for Macron who is trying to attract leftwing voters ahead of the second round. On Wednesday, he chose to attack his opponent on the credibility of her generous proposals.

“You never explain how you would finance [pensions]… you are not honest with people,” he said.“So either you have hidden taxes or you are threatening the balance of [our pensions system].”

Macron and Le Pen clashed on their climate policies with Macron accusing his opponent of being a “climate skeptic” and Le Pen replying Macron was a “climate hypocrite.”

While Le Pen said she wasn’t against pursuing a green transition, she thought “it needs to be way less rapid” and blamed “the economic model based on international free trade” for “the majority” of greenhouse gas emissions.

Le Pen wrote in her manifesto that, if elected, she would “assess” and set France’s carbon dioxide emissions reduction target on an annual basis and “depending on the trajectories of other countries and the will of the French people and their quality of life.” That is likely to make it difficult for France to stay on track and reach its goals under the Paris climate agreement and the European Green Deal — something Le Pen wants to “get out of.”

Macron has been pitching more green ideas and adapting his project after the first round of the presidential election in an effort to attract left-wing and hesitant voters.

On Wednesday, both candidates however agreed on one thing: the development of new nuclear power reactors to reduce the dependency of the country on energy imports.

At the start of his term, Macron pledged to reduce the share of nuclear in the country’s electricity mix from 70 to 50 percent. Le Pen accused him of doing a U-turn on the issue.

The two rivals for the presidency, however, disagreed on the role of nuclear power in the green transition. Le Pen wants to make nuclear a cornerstone of its energy policy, dismantling existing wind farms and banning the construction of new solar and wind power. Macron on the contrary insisted that “there is no exit strategy from fossil fuels only with nuclear” and that new investments into renewable energy are needed in parallel. France has, for now, failed to achieve its goals under the EU Renewable Energy Directive and is therefore under pressure from the EU to boost its renewables capacity.