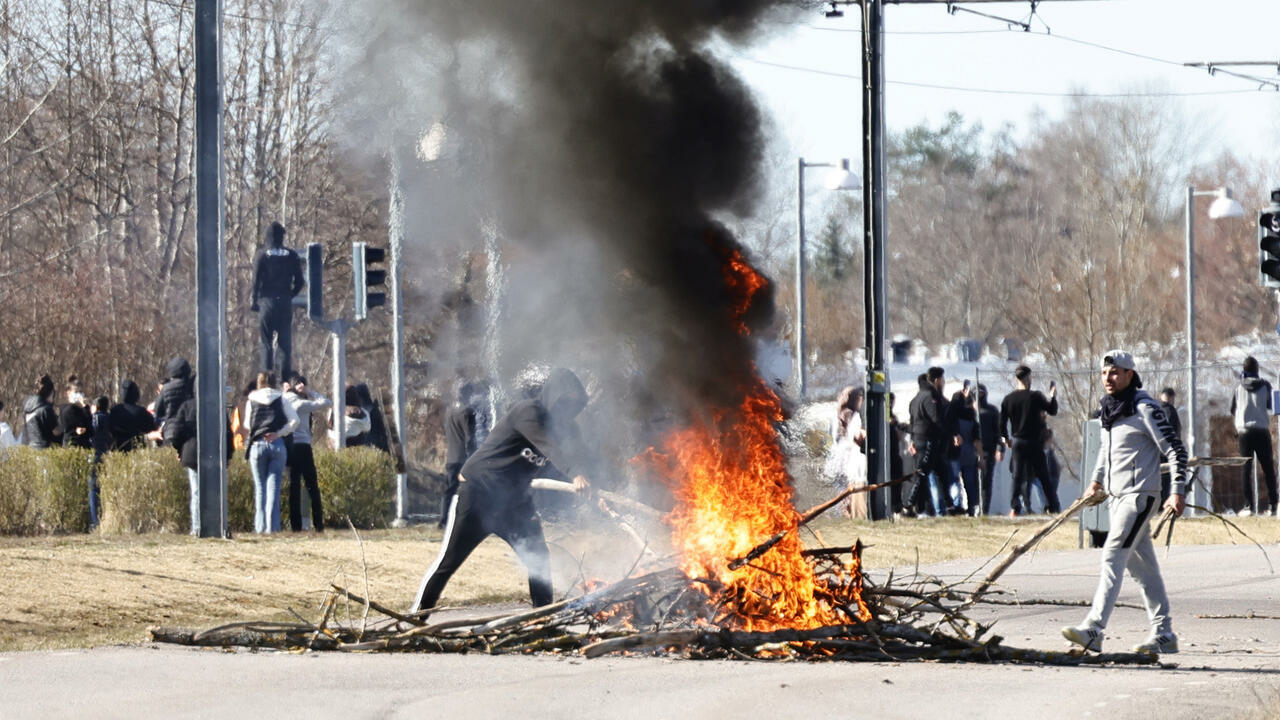 Protesters burn branches to block a road during a riot in Norrkoping, Sweden April 17, 2022. The unrest was triggered by the right-wing extremist danish provocateur Rasmus Paludan saying that he will return to the citys Norrkoping and Linkoping for new demonstrations including burning the Koran for the fourth day in a row. Photo Stefan Jerrevang / TT kod 60160
Share:

Stockholm –  Riots across Sweden sparked by a notorious anti-immigrant provocateur threatening to tour the country burning the Koran has challenged the country’s limits to free speech.

Police clashed with groups of mostly masked young men in several towns and cities after the anti-Islam Danish-Swedish politician Rasmus Paludan announced his Koran burning “tour” for the Muslim holy month of Ramadam.

Swedish police insisted they had to grant permits for Paludan’s incendiary events because of the country’s liberal freedom of speech laws.

But several Muslim countries have reacted angrily, with Iraq’s foreign ministry warning the affair could have “serious repercussions” on “relations between Sweden and Muslims in general.”

Despite the outcry, justice minister Morgan Johansson stressed the importance of protecting the country’s freedoms.

“We are living in a democracy with far-reaching freedoms of speech and the press and we should be very proud of that,” he said.

But he admitted that those freedoms were being used by a “Danish extremist” to foster “hate, division and violence,” which he deplored.

At least 40 people were hurt — 26 of them police officers — and as many arrested after days of rioting over the Easter weekend in Norrkoping, Linkoping, Landskrona, Orebro, Malmo and the capital Stockholm.

A school was also set alight with 20 police vehicles either damaged or destroyed.

But with Paludan announcing more events, many local officials are having misgivings.

“Under these circumstances, the police should not grant permits for more public gatherings,” Anna Thorn, city manager of Norrkoping, told a press conference Tuesday.

Freedom of speech has historically enjoyed strong protection in Sweden.

While police can deny permits for gatherings that would constitute “incitement of against an ethnic group”, the bar is usually high.

Much of the rioters’ fury was directed at police, with national police chief Anders Thornberg even saying they “tried to kill police officers”.

The Koran burnings were planned for areas with large Muslim populations, which also happen to be neighbourhoods that Swedish police designate “vulnerable areas”.

The term refers to areas with “high levels of poverty, high levels of people of a foreign background and by having criminal networks exerting pressure on those living in or visiting these neighbourhoods,” Manne Gerell, an associate professor of Criminology at Malmo University, told AFP.

The wealthy Scandinavian country of 10.3 million has a generous immigration policy, granting asylum and family reunifications to more than 400,000 people between 2010 and 2019, according to official figures.

But Sweden has struggled to integrate many, with experts claiming that thousands fail to learn the language proficiently and find jobs.

Gerell said some of these areas have also seen riots targeting “authorities in general, and police in particular”.

Higher crime in these areas also leads to police stopping and searching young men who often feel angry and picked upon.

“Many of them would maybe even hate the police,” Gerell said.

While political and religious grievances could be triggers, some of the rioters could also be thrill-seekers or those just looking to vent their frustration with police, the criminologist argued.

Kivanc Atak, a researcher at the criminology department of Stockholm’s University, said the “tense relationship” between police and ethnic minority youth was not limited to Sweden.

But previous riots targeting police there have been triggered by incidents directly involving officers, such as shootings during arrests.

Atak said it was “striking” that this was not the case this time, and it called into question where the line between free speech and outright provocation should be drawn.