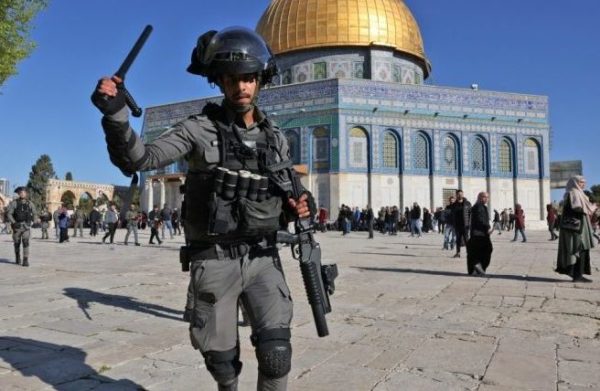 Israeli police have entered the Al-Aqsa Mosque compound as worshippers gathered for early morning prayers, two days after detaining hundreds of worshippers at the site in another raid at the mosque.
Share:

Israeli police have entered the Al-Aqsa Mosque compound as worshippers gathered for early morning prayers, two days after detaining hundreds at the site in another raid at the mosque.

Israeli authorities said they entered the compound on Sunday to facilitate routine visits by Jews to the holy site and that Palestinians had stockpiled stones and set up barriers in the compound.

The police cleared Palestinians out of the sprawling esplanade outside the mosque, while dozens remained inside.

Two Palestinians were arrested, The Associated Press reported, and two were injured, according to the Palestinian Red Cross.

Al Jazeera’s Natasha Ghoneim, reporting from occupied East Jerusalem, said the raid took place ahead of a three-hour timeframe during which non-Muslims are allowed to visit the compound, the third-holiest in Islam and the holiest for Jews, who refer to it as the Temple Mount.

Tensions had been high after the far-right Jewish group Return to Temple Mount offered a cash prize to anyone who went into Al-Aqsa Mosque and sacrificed a goat – a Jewish religious ritual that is prohibited inside the mosque and that would constitute a further provocation.

“This didn’t happen but it went viral on social media,” Ghoneim said, adding that it contributed to a rise in tensions.

More than 300 Palestinians were detained on Friday in what rights watchdogs say was the largest en masse arrest over the course of one hour and in one location in more than 20 years.

At least 158 Palestinians were injured in the ensuing violence.

Others showed worshippers barricading themselves inside the mosque amid what appeared to be clouds of tear gas.

“There were many injured people, they fired rubber bullets inside Al-Aqsa Mosque compound. They were beating everyone, even the paramedics, they hit them,” said al-Khatib, who suffered a broken hand.

Israeli police said they entered the compound on Friday to break up a “violent” crowd that remained at the end of the morning prayers.

Palestinians have long feared that Israel plans to take over the Al-Aqsa Mosque compound or partition it.

Israeli authorities say they are committed to maintaining the status quo, but in recent years large groups of nationalist and religious Jews have regularly visited the site with police escorts, something the Palestinians view as a provocation.

Palestinians and Israelis have witnessed an increase in violence over the past month, with Israeli forces stepping up raids, shootings and arrests across the occupied West Bank and Palestinian attackers targeting people in Israeli cities.

Four attacks by Palestinians in four Israeli cities have taken place since March 22, killing 14 people, while Israel has increased its raids on Palestinian towns and villages, leading to violence and arrests.

Sixteen Palestinians have been killed in the same period.

Palestinians say the latest outbreak of violence stems from frustration over Israeli policies towards them, the continued occupation of the Palestinian territories, and weak Palestinian leadership.

Hundreds of Palestinians in the Gaza Strip took to the streets to protest Israeli forces breaking into the Al-Aqsa Mosque on Friday, in a show of support for people living in the occupied West Bank.

Last year, raids of Al-Aqsa Mosque by Israeli security forces during the holy month of Ramadan heightened tensions further and, four days later, an 11-day Israeli assault on Gaza began, ostensibly in response to rockets fired by Hamas towards Israel.