Will renewables bring light to a particularly dark situation in Lebanon? 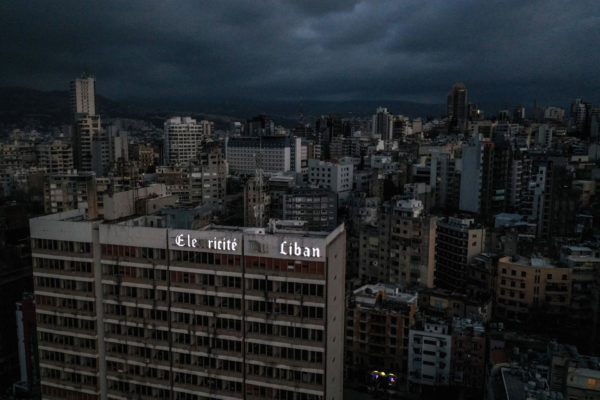 Decades of mismanagement and corruption have left Lebanon with an unreliable energy system. A shift to renewables could help but only if it comes with complete energy market reform.

In October 2021, the power in Lebanon cut out completely for 24 hours. The country’s two main power plants had run out of fuel, leaving the entire country without electricity. The nation was plunged into darkness and hospitals were forced to halt vital procedures.

In August of the same year, the American University of Beirut Medical Centre had appealed to the international community for help when it had just 48 hours of fuel left for its generators; after that it would no longer have the power to run its respirators, which 15 children and more than 100 dialysis patients depended on for their lives.

The blackout was a symptom of a bigger problem: decades of mismanagement and extreme fuel shortages culminated in an energy crisis that started in 2020. Power outages are nothing new for Lebanese citizens – they have been part of daily life for decades – but they are becoming more commonplace. Today’s crisis comes on top of political instability, a financial crisis, the Covid-19 pandemic and the lasting effects of the 2020 Beirut blast, when a large amount of ammonium nitrate stored at the Port of Beirut exploded, causing hundreds of deaths, $15bn of damage, and leaving upwards of 300,000 homeless.

Corrupt to the core

Lebanon became independent from France in 1943, and since the end of civil war in 1989 it has operated under the Taif Agreement, where the ratio of parliamentary representatives must be half Muslim and half Christian. The factional, sectarian political system is structured so that the President of Lebanon must be a Maronite Christian, the Prime Minister a Sunni Muslim and the speaker of the parliament a Shi’a Muslim.

In theory, the system guarantees that all religious groups are represented in government, but the reality is that it feeds political division. According to a study for the Anti-Corruption Evidence (ACE) research consortium: “The direct result of [the sectarian system] is a lack of accountability wherein […] failings cannot be traced to specific individuals or groups.” It further notes that “the blame-shifting strategies and ‘everybody is responsible’ slogan that is often cited by politicians and the public further the murky environment in which corruption can thrive”.

The study suggests that the dysfunctional energy sector in Lebanon is a major constraint on the country’s progress. “Over decades, corruption and mismanagement in Lebanon’s electricity sector has contributed to the draining of public finances and has deprived the Lebanese people of their right to reliable and affordable electricity.”

Electricité du Liban (EDL), the state utility, is at the root of the problem. With a total installed capacity of 3,000MW, EDL is responsible for delivering electricity to the entire country. Promised reforms to make the energy system more secure and reliable did not happen, resulting in high technical losses and a large mismatch between demand and generation. Together, technical and non-technical losses – for instance non-billed consumption or illegal connections – add up to a third of EDL’s annual power generation.

EDL covered just 63% of the country’s total electricity demand in 2018. Ten years earlier, 78% of demand was met. The growing gap is attributable to the nation’s increasing population and consumption, as well as a lack of investment in new power plants.

According to World Bank research, citizens face daily power cuts ranging from an average of three hours in the city of Beirut to more than ten hours further inland. Additionally, the national grid is dependent on imported fuel oil, leaving the country vulnerable to fuel scarcity or oil price changes.

Despite rising fuel prices, electricity tariffs have not been adjusted since 1992. With the government borrowing money to subsidise energy costs to maintain the original tariffs, the nation has been driven further into debt. “The oil price in the 1990s was $20, but now it has increased to over $90 a barrel, but the Minister of Finance pays the difference,” explains Ayoub. “Each year there is a budgetary transfer of around $1.5–2bn from the Ministry to EDL.”

The energy sector plays a primary role in the country’s financial crisis. Half of Lebanon’s overall debt is attributable to EDL. In a revelatory statement, the World Bank has called the Lebanese financial crisis “one of the top ten most […] severe economic collapses worldwide since the 1850s”.

“Such a brutal contraction is usually associated with conflicts or wars,” writes the World Bank.

Because Lebanese citizens do not have access to reliable electricity, they are often dependent on expensive and polluting diesel generators. According to a World Bank report on private generators in Lebanon, their owners have “created a complex and informal economy that has been resistant to regulations and government oversights”.

The World Bank estimates there are more than 32,000 generators in Lebanon and 75% of residential and commercial customers rely on them for electricity.

The generators offer electricity to citizens when the power from EDL cuts out, but they are far from a sustainable solution. Tolerated by the government, they are neither legal nor well regulated. Notwithstanding the fuel’s pollution – in 2018, diesel generators caused more than 11% of Lebanon’s total emissions – a diesel ‘black market’ now exists among private generator owners, who set high prices that other citizens have no choice but to turn to when there are fuel shortages for EDL.

“Economic deterioration is a high trigger for escalated violence,” says Shaya Laughlin, a researcher at Beirut think tank Triangle. “I believe there is a risk of increased tensions between communities as resources – such as electricity and heating diesel – become more out of reach for much of the population.”

The Lebanese government itself has not made any investments to improve its electricity or energy infrastructure since 1998. Instead, it has relied on international donors to prevent full blackouts.

Newly fossil-fuel rich Egypt agreed to extend a gas pipeline to Lebanon in December 2021. The World Bank is also funding a pipeline from Jordan to Lebanon via Syria that will further bolster Lebanon’s capacity by 250MW. The gas imports were supposed to begin in February 2022, but delays in funding and concerns about US sanctions on Syria interrupting flows have caused delays.

In late March, the Lebanese government and World Bank agreed on plans to build three new 825MW power plants that will run on natural gas, heavy fuel oil and diesel. Other plans include a 520MW increase in generation capacity at the Deir Ammar Temporary Power Plant to be installed around 2022–26 – which will require an increase in the amount of gas imported from Egypt and likely a costly one given the market volatility from the Ukraine war – the installation of a floating storage and regasification unit to secure liquified natural gas, and the appointment of an independent regulatory body by the end of 2022 to oversee operations. Lebanon requires 2,000MW of new capacity to bridge the current electricity supply deficit. All these plans are yet to be backed by funding by the World Bank.

Plans for reform in Lebanon’s energy sector do not typically come to fruition. The new government, led by Najib Mikati – a billionaire and Lebanon’s wealthiest person – is predicted to bring more of the same. Mikati, who is prime minister, held the position twice before, including leading the tumultuous government that put the nation into severe crisis.

Even if the latest building plans are acted upon, the question remains as to whether such measures will do enough without structural reform.

Jessica Obeid, an energy consultant at the Middle East Institute, a Washington, D.C.-based think tank, believes the Lebanese government’s inaction on its energy crisis is encouraged by the international community’s willingness to provide support to prevent major collapse.

“We see the international community doesn’t want to get to a point where there is a total blackout and this feeds the long-standing perception that everyone in power has – that at the last minute, someone is going to give Lebanon some money,” she says. “[The government] knew we were heading into a huge crisis. They didn’t do anything.”

Less than 2% of Lebanon’s energy comes from renewables

“Technical and financial problems are not the root causes of the issues in the power sector,” Obeid continues. “[They are] consequences of corruption, mismanagement and weak governance. Proposing technical and financial solutions without addressing the sector’s governance is not going to lead to any affordable or sustainable solution any time soon.”

This is a sentiment shared by Ayoub. “When Lebanese politicians make uninformed technical [energy sector] decisions, it feeds the notorious system of clientelism and confessionalism within government,” he says. “We need implementation of reforms in the sector because we are talking about electricity. The question was never technical. It was always political,” Ayoub concludes.

According to the International Renewable Energy Agency’s 2020 Renewable Energy Outlook for Lebanon, renewable energy is now by far the country’s most affordable energy solution. The country enjoys 300 days of sun a year and has an abundance of wind and hydropower availability.

Policy statements made by Lebanon’s Ministry of Energy and Water in February 2022 outline proposals to improve the energy sector. These include reducing transmission losses, improving distribution service performance, enhancing governance, and putting the country on track to restore financial sustainability. The improvements are conditional on various factors, including financial and legal support from internal ministries and international stakeholders.

The Lebanese think tank Triangle identifies a target of 40% renewable energy as a feasible goal to be achieved within a decade. This would see nearly all current diesel generators replaced with renewable energy.

While the current governmental structure and its resulting political bickering holds back any real progress in Lebanon, distributed solutions such as solar mini-grids are a potential alternative.

Obeid believes the solution is to divert resources towards decentralisation: “[Changing] the governance structure, [means] decentralising part of the sector until you can develop a sustainable solution to reduce much of the load on the electricity utility, which is bankrupt, and which loses money every time it generates power, because it generates very expensive electricity.”

“People are realising that sadly, they have only got each other and not the state. Until there are strong institutions and a serious state […] investors need to rethink what they are funding. Financing mechanisms [should focus on] small-scale distributed renewable energy deployment, especially for productive activities, because if businesses can’t run then [Lebanon] can’t recover economically.”

Nour Ghantous is a junior reporter based in London. She is a graduate of the MSc in Humanitarian Engineering at Warwick University, where she authored a consultancy report investigating the feasibility of installing wind turbines on campus. She has previously written for Lacuna magazine and the Boar

Isabeau van Halm is a data journalist based in London. She has previously worked as editor of a local newspaper and is a graduate of the Erasmus Mundus Journalism Master’s.