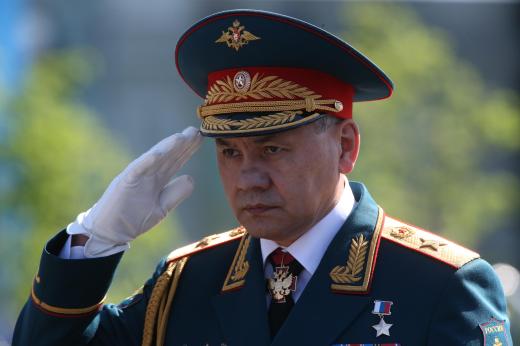 In a possible sign of the troubles, Defence Minister Sergei Shoigu disappeared from view for some two weeks this month
Share:

The killing in action of several Russian generals and senior military figures in Ukraine has revealed the extent of the heavy losses and logistical problems encountered by Moscow’s invading army.

According to Kyiv, seven Russian generals have been killed since the invasion was launched on February 24, in what Western officials say would be an unusually high casualty rate among military top brass.

It is not possible to independently verify this figure and official Russian sources have so far confirmed only the death of one general and another senior naval commander.

According to the Ukraine defence ministry on Friday, the seventh Russian general to lose his life was Lieutenant General Yakov Rezantsev who was killed in fighting in Chornobaivka outside the southern city of Kherson.

“I would treat these numbers with a grain of salt,” said Colin Clarke, director of research at the New York-based research think tank Soufan Centre.

“But whether it’s five or 15 generals, the fact that they are losing any generals at all demonstrates that Russian command-and-control is extremely weak and its lines of communication have been severed by Ukrainian military success,” he added.

“This is a sign of total unpreparedness of the army,” he said. “All this, no doubt, demoralises the Russian army — they realise that their top leadership is completely incompetent”.

The weaknesses shown by the Russian army in Ukraine, in particular in intelligence, logistics and tactical errors, have forced military chiefs to go to the front lines, said a senior French military official, who asked not to be named.

“Orders may not have been well understood or received, units could be disobedient or there is a major problem with morale. All this could make the generals go to the front.”

Of the generals, only the death in action on February 28 of Major General Andrei Sukhovetsky, deputy commander of Russia’s 41st Combined Arms Army, has been confirmed by official Russian sources.

Andrei Paliy, the Kyiv-born deputy commander of the Black Sea fleet, was killed in fighting around Mariupol, the governor of annexed Crimea, Mikhail Razvozhayev, announced on his Telegram channel.

But these admissions have been exceptions in a climate where Russia has only been disclosing the most limited information about its losses.

Russia has only on two occasions in the month-long conflict given an official toll for Russian soldiers killed, the latest on March 25 giving a figure of 1,351 deaths.

In a possible sign of the troubles, Defence Minister Sergei Shoigu disappeared from view for some two weeks this month, re-emerging only on Saturday, although the Kremlin insisted nothing was untoward.

While Western sources do not confirm Ukraine’s figure of 17,000 Russians killed, they say the actual Russian toll is likely several times higher than the official one.

Grave without a name

“There is not a word about this in any Russian media… This general will be buried in a grave without a name,” he wrote.

A Western security source, who asked not to be named, confirmed Ukraine’s claim that Rezantsev was the seventh Russian general to have been killed.

The official said another Russian colonel commanding a brigade had even been killed by his own troops, who ran him over “as a consequence of the scale of losses that had been taken by his brigade”.

There remains uncertainty about some of the Russian generals Ukraine says have been killed.

According to the Ukrainian authorities, major general Magomed Tushaev was killed in fighting outside Kyiv on February 26.

Aged 36, he was a general in the National Guard (Rosgvardia), an internal military force that answers directly to Putin. He is the highest-ranking Chechen said to have been killed.

However, Chechnya’s leader Ramzan Kadyrov has insisted that Tushaev is alive, saying he took part in a meeting on March 23 and posting a video of a man purported to be him speaking on March 13.

Russian TV on Monday broadcast images allegedly showing Kadyrov in the Ukrainian city of Mariupol meeting a man it said is Lieutenant General Andrei Mordvichev, one of the generals Ukraine says have been killed.

Ukrainian officials have made clear that the Russian generals are a target and their task appears to have been eased by the Russian army using communication tools that are easily intercepted by their adversary.

The Russian units “do not pay attention to computer security procedures and are easily intercepted,” Alexander Grinberg, analyst at the Jerusalem Institute for Security and Strategy (JISS), told AFP.

He said in the battlefield the commanders were identifiable with the naked eye in vehicles recognisable by “antennas and other vehicles that protect it” which can then be attacked.