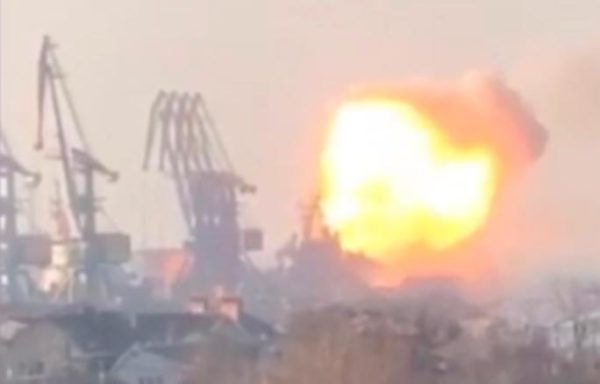 A screen grab of a video shared on social media of the Berdyansk port fire.The Armed Forces of Ukraine said they had “destroyed a large landing ship,” which they named as the “Orsk” in a post on Facebook.
Share:

THIS is the dramatic moment a Russian ship packed with ammo was reportedly blown up in Ukraine as humiliated Putin’s Navy is forced to retreat.

Lviv, Ukraine (CNN)Ukrainian armed forces said they destroyed a large Russian landing ship at the port of Berdyansk in southern Ukraine on Thursday.

The port, which had recently been occupied by Russian forces with several Russian warships in dock, was rocked by a series of heavy explosions soon after dawn.

Social media videos showed fires raging at the dockside, with a series of secondary explosions reverberating across the city.

The Armed Forces of Ukraine said they had “destroyed a large landing ship,” which they named as the “Orsk” in a post on Facebook.

Several Russian ships had been unloading military equipment at Berdyansk in recent days, according to reports from the port by Russian media outlets.

The Ukrainian armed forces said that besides destroying the Orsk, two more ships were damaged. “A 3,000-ton fuel tank was also destroyed. The fire spread to the enemy’s ammunition depot. Details of the damage inflicted on the occupier are being clarified,” they said.The United States said that Ukraine likely did conduct a successful attack against Russian ships in Berdiansk, according to a defense official, though it is unclear what type of weapon or weapons were used in the attack. It echoes a similar statement from the British Ministry of Defence, which said that Ukrainian forces have attacked “high value targets” in Russian-occupied areas of Ukraine, including a landing ship and ammunition depots at Berdyansk.

Analysis of videos uploaded on Thursday showed that one Russian naval vessel left the port soon after the explosions.

The Russian Ministry of Defense had previously reported that “the large landing ship Orsk is the first warship of the Russian Federation to enter the port of Berdyansk. It delivered equipment — armored personnel carriers.”

“The ships of this project are very spacious and can take on board a large amount of equipment, up to 20 tanks or up to 40 armored personnel carriers,” the ministry said.

It has made no official comment about the explosion.

One day before it was consumed by the fire, the Orsk was featured in a lengthy news report on the pro-Putin TV network, RT.

The piece opens with video shot from a drone, looking down on the Orsk, which the reporter mentions by name. As the camera shows an armored personnel carrier being slowly lifted off the ship, the reporter says, “This is a unique sight: a Russian naval armada at a port which Ukrainian troops had abandoned without a fight, leaving its facilities entirely intact.”

Later, standing on deck, the reporter reveals some of the ship’s weaponry, including two large naval guns, before detailing the ship’s main function as a landing vessel.

“The point of this ship is to transport troops and heavy equipment. It can fit as many as 20 tanks, or 40 armored personnel carriers, along with hundreds upon hundreds of troops,” he says.

“For Russia’s operation to succeed, it is paramount that troops are supplied and reinforced non-stop,” the reporter adds.

In an indication of why the loss of the Orsk could represent a significant setback for Russia, a Russian officer standing quayside says, “Our arrival here is a milestone event. It opens up completely new opportunities for the Black Sea Fleet to use existing Ukrainian infrastructure for our logistics operations.”

Berdyansk sits on the Azov Sea and is roughly 45 miles (70 kilometers) southwest of Mariupol. The city has a small naval base and a population of about 100,000.

Its defenders rejected an ultimatum to surrender by Monday morning, thwarting a Russian effort to finalize a land bridge linking Crimea with the separatist republics of the eastern Donbas region.

Russia has fired on Mariupol from the Sea of Azov, according to a senior US defense official, using a group of approximately seven ships to launch attacks on the critical coastal city.

Further west, Ukrainians have been fighting to take back the city of Kherson, as well as pushing Russian forces from the northeast of Mykolaiv, forcing them to reposition south of the city, a senior US defense official said Tuesday.

The official cautioned that the US cannot say whether these moves are part of a “larger operational plan” by the Ukrainians, but called the Ukrainian defense “nimble” and “agile.”